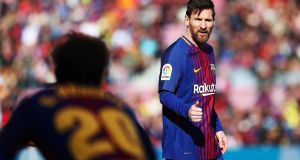 Guardiola, asked about the reputed offer, said: “Lionel Messi has signed a contract one week ago. This was never going to happen; Messi started his career there and he’s going to finish it there. If he wanted to leave he wouldn’t have signed the contract.”

City play Shakhtar Donetsk in Kharkiv tonight in the final Group F game already through as winners. If they win Guardiola will be the club’s first manager to win all six group games.

Yaya Touré, who won the Champions League with Barcelona under Guardiola in 2009, believes City are playing the best football in the competition.

The veteran midfielder has featured little this season but has been impressed by the performances of his team-mates.

“We think we practise the best football in Europe when we go forward, though we find it difficult against some opponents,” Touré said. “We need to play against a big opponent to see where we are.

“Teams respect us more now. They feel the way we play and attack. We are in a good moment, full of confidence. If you ask all my team-mates they are all enjoying it.”

“When you see the team playing you are sure we are going to score goals because we see how we are dominating, how we control the game. It’s fantastic.

“The Champions League is probably the best competition in the world. To be able to win it again, to repeat what I did in 2009 with the manager in a different country, a different club, would be something special.

“But we have to wait because tomorrow we have Shakhtar.”

Guardiola, though, was less emphatic. “We are doing well but that doesn’t mean you will achieve the title,” he said. “In this competition one bad 45 minutes and you are out. That means you can win the title but go out if you are doing well. I’m not concerned if we are playing the best football.”

Guardiola said David Silva may miss Sunday’s derby at Manchester United. “David had a little bit of a problem in the last minutes [against West Ham United on Sunday],” he said. “We made a test after the game and I don’t know if he is able to play on Sunday so that’s why he stayed there, to recover in Manchester.”

Asked what the problem was, Guardiola laughed off the question. He confirmed Bernardo Silva would start and said City, winners of their past 20 games, would go for victory against Ukraine’s champions, who are second in the group.

“We play for our prestige and to keep our winning mentality,” he said. “We are so happy to be in the last 16 but it will be tough. I saw them play Napoli, their midfield is good, their buildup is perfect. It is a tough game, a tough team.”