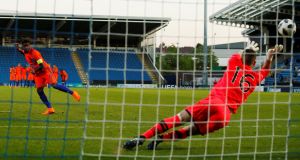 Daishawn Redan’s penalty was saved by James Corcoran, before the goalkeeper was sent off and the spot kick taken again. Photograph: Reuters

There was a distasteful end to the Republic of Ireland’s Under-17 European Championship experience as they exited at the quarter-final stage on Monday night in Chesterfield.

However, Czech Republic referee Zbynek Proske deemed the 16-year-old goalkeeper had stepped off his line in saving Daishawn Redan’s attempt and not only ordered a retake but issued a second yellow card to Cherry Orchard stopper.

When the Chelsea striker secured their meeting with England by beating centre back and stand-in goalkeeper Oisin McEntee, Martin O’Neill came down from his seat in the Proact Stadium to confront the referee.

The Ireland senior manager, who had attended all four of Ireland’s game at the finals, reflected the Irish disappointment and wasn’t afraid to vent his ire.

“It was a frustrating end to the match, especially as the referee had warned the Dutch goalkeeper twice during the shoot-out,” said Ireland manager Colin O’Brien.

“We’ve had a really good four games, I’m proud of them putting the first goal of the tournament past the Dutch, and people at home should remember the football over the way it ended.”

Corcoran was only called once into action in the first half when Van Gelderen’s header from a free-kick cleared the crossbar.

Ireland have been eliminated in bizarre, controversial fashion at the U17 Euros after goalkeeper Jimmy Corcoran was shown a second yellow card for moving off his line too early during the penalty shootout https://t.co/O48xsGehPh pic.twitter.com/yroYmS84ca

Otherwise, for all the dominance the runaway victors of Group D had in midfield with Wouter Burger controlling matters, they failed to penetrate a disciplined Ireland defence.

Indeed, Parrott and Tyreik Wright each caused danger by breaking at pace. Aston Villa winger Wright, in fact, should have been awarded a free-kick on the edge of the box for being shoved over by Jurrien Maduro but Czech referee Zbynek Proske waved away the appeals.

Redan, the forward who had scored in seven of his eight competitive games for the Dutch, had been kept at bay in the first 40 minutes, prompting the introduction of Brian Brobbey shortly after the restart.

The Ajax striker was unlucky to miss on a place, having scored both goals in the 2-0 win over Serbia, and his power up front was the cue for his team to adopt a more direct approach.

Redan had to brush off a stern challenge from Parrott, which earned the Spurs man a booking, to carry on and he was relieved to see one his defenders score the opener with a header inside the six-yard box from Elayis Tavsan.

Within 180 seconds, Ireland were back on terms through the first goal conceded at the tournament by the Dutch. Parrott made space by exchanging passes with Barry Coffey on the left side of the box before beating goalkeeper Joey Koorevaar with a low shot.

As Uefa don’t have extra-time at these tournaments, then came penalties and bundles more drama.

Following O’Neill departure from the pitch, he entered the Irish dressing-room to congratulate the players on their week’s work.

“It was a cruel finish to the tournament but these boys have big careers ahead of them,” said O’Brien.

“Martin had been with us all the way and he saw the effort the lads put in. To a man, they were brilliant and are tonight devastated to be out.

“However, they will come back strong from this. I know from working with these lads how determined they are and they have a lot of football ahead of them.”

Corcoran was too distraught to express his views afterwards though his counterpart Koorevaar insisted they both had been warned about encroachment by the officials.

For Corcoran, the youngest member of the squad who was only handed his first starting place of the season due to an injury to regular stopper Kian Clarke, he’ll need time to recover from this set-back.

“I feel mixed emotions,” admitted Ireland captain Nathan Collins. “We are devastated but we’ll learn from this experience.”

1 Ken Early: Handball ‘crisis’ a timely distraction from the grim bigger picture
2 The Offload: Springbok heavyweights heading for Pro14
3 All in the Game: No sympathy from Bruno Fernandes
4 Malachy Clerkin: Nothing compares to rich tapestry of sound offered up by GAA match
5 Arctic conditions in Ballymena and snowflakes in Paris
Real news has value SUBSCRIBE
Crossword Get access to over 6,000 interactive crosswords