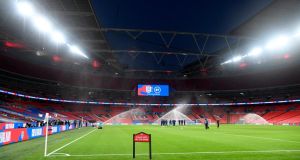 The FAI has agreed a friendly international game away to England to replace the Irish side’s previously scheduled trip to Bosnia and Herzegovina next month. Though it represents something of a risk in terms of World Cup ranking positions, the game is a trade up in terms of interest and economic benefit and will take place on November 12th.

Uefa had originally lined up the losing sides in the various Euro2020 playoff games to face each other in friendlies to fill the first slot of the extended international window. The move may have made organisational sense at the time given the notice involved but the lineup produced didn’t have much appeal in this instance while the logic has been somewhat overshadowed by developments since.

The Bosnians were officially the ones to request a rethink but the FAI certainly also seem to have been happy to make an alternative plan.

In the wake of the problems encountered last month in relation to coronavirus and flights, the new one will spare Stephen Kenny and his players an unnecessary return trip half way across Europe and allow the manager more time with his squad ahead of the Nations League games against Wales and Bulgaria.

The fact that it will be played at an empty Wembley stadium will, however, clearly deprive the fixture of some of its traditional sense of occasion. The two countries last met in Dublin in June 2015 when they played out a scoreless draw but that game, like the one in Wembley two years previously, attracted a full house and a good deal of attention.

The one obvious issue on this occasion is that the encounter will, along with the two competitive games that follow on November 15th and 18th away to Wales then home to Bulgaria respectively, count for the purposes of November’s Fifa ranking list which will, in turn, dictate the seedings for the World Cup qualifying draw later in the month.

Ireland are currently 20th in the European section of the list and, with the pots to comprise of 10 teams apiece and very few points separating the nations immediately above and below Kenny’ side, the game does represent a risk.

Clearly, a win or even draw would be a help but the fact that it is a friendly and that the opponents are a higher ranked team would both serve to limit the damage to Ireland’s position in the event of a defeat.

England, though, have not actually beaten Ireland since the mid-80s. There has been one win for Ireland, at Euro’88, and then five drawn games along with the 1995 encounter at Lansdowne Road that had to be abandoned less than a half an hour in.

“It’s a high quality game for the team,” said Kenny in a statement from the association announcing next month’s fixture. “With minimal travel between London, Cardiff and Dublin in these changed times, it is better for us logistically with player welfare paramount. It helps ensure we will have our strongest possible squad available for all three matches.”

The association’s interim CEO, Gary Owens, said the FAI was “delighted” to accept the invitation.

“There is something very special about any game against England,” he said, “and I know our supporters will look forward to this match, even if they can’t be there.”