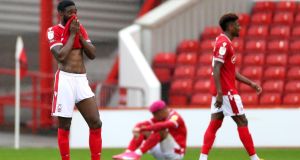 Nottingham Forest are without a point after their opening four Championship fixtures. Photograph: Bradley Collyer/PA

Off a corridor in the offices behind the main stand at the City Ground, around the corner from a bronze bust of Brian Clough and inspirational quotes and images of Nottingham Forest’s most revered era, the club’s new manager, Chris Hughton, is putting the challenge that lies ahead into perspective.

“It is very early in the season,” he says. “The ideal time to take over a club is always in the summer, but I’d certainly rather take over with four games having gone than 10, 14, 20 played.”

Hughton, who was sacked after leading Brighton to safety in the Premier League 18 months ago, will return to the technical area in the Championship at Ewood Park on Saturday, when Forest travel to Blackburn hoping to end a dismal run.

At this embryonic stage, Forest occupy a relegation place having lost all five competitive matches since September but their malaise runs deeper. They are winless in 11 games, dating back to last season under Sabri Lamouchi, who presided over a spectacular final-day capitulation against Stoke.

Forest had been in the play-offs for 209 days and with six games to play they contrived to blow a seven-point buffer. It would be easy to exhibit doom and gloom but Hughton is a glass half-full kind of character.

They now head into a manic period of seven games in 21 days, including an east Midlands derby at home to Derby next Friday, and the new manager is keen to foster a feelgood factor. Hughton, who lifted the Championship title with Newcastle and took Brighton up as runners-up three years ago, knows the division like the back of his hand. In his last four full seasons managing in the second tier he has never finished outside the top four and is determined to help Forest achieve their goal of returning to the top flight after 21 years away.

“We might complain about the amount of games over a short period of time but whatever position you are in in the league, getting good results across a one-week period can make such a difference to the league table – you are, in effect, playing for nine points across a week.”

Perhaps the toughest part will be managing a bloated squad. After another aggressive, and arguably erratic, recruitment drive – Forest have signed 13 new players – a 30-strong first-team squad means they could almost field three separate XIs. Hughton acknowledges they are overstocked in central areas but hopes to use those numbers to his advantage with Anthony Knockaert, the Fulham winger who excelled for him at Brighton, expected to join on loan.

“It’s my responsibility to try and get those balances right in the squad and to finish Friday 5pm [the EFL transfer deadline] with the squad I would like. Sometimes that is possible. On most occasions it’s not – for every manager.

“I’ve inherited a good squad. Some managers might complain they don’t have enough. I’ve certainly got good depth in the squad and it is up to me to use it.”

Scott McKenna and Loïc Mbe Soh have arrived from Aberdeen and Paris Saint-Germain respectively to bolster the defence but it remains to be seen whether Hughton leans on Michael Dawson, the wily 36-year-old who began his career at Forest in the youth team in 1997. These days there is another academy graduate causing a stir among fans in Alex Mighten, the 18-year-old who signed a new five-year contract in August. The winger is the latest prospect to emerge from the care of the former academy manager Gary Brazil, who was appointed director of football development this week.

Hughton recognises the Greek owner, Evangelos Marinakis, unequivocally wants Forest back on the Premier League map. “I know the road this club has gone along in a period of time. There probably isn’t anything that somebody has told me or can tell me that I don’t already know. It’s a huge club. It’s a good feeling to be the manager of a big club.”

Forest have form for gambling on unproven players but in Hughton, their 14th permanent manager in 10 years, they have appointed what is, on the face of it, a low-risk option.

“He’s had great success in this league and it’s good to have a manager who has had success because you can believe in everything he is putting forward,” says the Forest striker Lewis Grabban. - Guardian