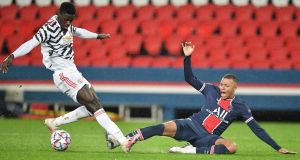 The manager praised an all-round team performance in which Scott McTominay played much of the first half without one of his contact lenses, Axel Tuanzebe defended admirably after 10 months out, and Bruno Fernandes scored when retaking a penalty, after his first attempt was saved.

Solskjær said of United’s stand-in captain: “I’m not surprised – you know he has great character and after the Newcastle one [he missed on Saturday] and this I was sure he would want to take it again.”

Fernandes’s opener came on 23 minutes and while Anthony Martial’s second-half own goal levelled the Group H match, Rashford’s strike in the 83rd minute clinched victory having scored the penalty that knocked PSG out of the last 16 when the sides last met at Parc des Princes in 2019.

Solskjær said: “We won against one of the best teams in the world – a fantastic one. Victor [Lindelof]and Axel played tremendous. It’s a better performance this time than last even though last time we won 3-1. The performance showed we had developed. Scott [McTominay]and Fred were outstanding. Scotty played the first half with only one eye – that was the most impressive thing because he lost his contact lens.”

Of Rashford’s composure to score the winner Solskjær said: “He’s got quality and took his goal very well, a great turn and a good finish in the corner.”

The victory follows the 4-1 win at Newcastle on Saturday, meaning United have responded to the 6-1 humiliation by Tottenham with two impressive performances. Solskjær is now looking forward to Chelsea’s visit on Saturday. “When you win games and perform well you get confidence. We’re going to go into that game confident. I’m looking forward to the next few months.”

The win came without the injured Harry Maguire and Mason Greenwood and with Paul Pogba demoted to the bench. “We have shown we have a good squad,” Solskjær said. - Guardian