Italy’s clinical finishing proves the difference against Ireland in Pisa 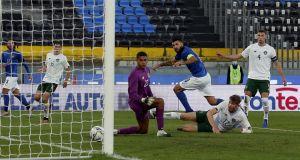 History can still be created by the Republic of Ireland under-21s despite Italy dislodging the European Championship qualification Group One table-toppers in Pisa on Tuesday.

The Italians, despite being decimated due to Covid-19 withdrawals, were full value for a victory that will likely earn them one of the one guaranteed spot for next year’s finals but Ireland boss Jim Crawford has a best runners-up berth in his sights.

The coach who replaced Stephen Kenny in the hot seat earlier this year has made it very clear to his players that six points from the meetings with Iceland at Tallaght Stadium on November 12th and in Luxembourg away five days later will secure second.

Uefa have reserved places at the finals for the best five runners-up across the nine groups and following Tuesday’s set of results, Ireland have their destiny in their own hands. Playoffs don’t feature in this competition.

“The players are hurting from losing to Italy but we outlined the task for the last two games in the dressingroom afterwards,” said Crawford.

“This campaign isn’t over and we’re still in an unbelievable position. I’m certain that our players will be better equipped for the next international window after playing more competitive minutes.”

Ireland failed to build on a steady start in Pisa, struggling to test goalkeeper Michele Cerofolini over the 90 minutes.

The stopper was one of seven starters drafted into the Italian starting line-up from the under-20s after Covid-19 wreaked havoc on the preparations.

Although the virus forced the postponement of Friday’s qualifier in Iceland and a major squad overhaul, it was two of their four survivors from the original panel that meted out the damage on sluggish Ireland.

Riccardo Sottil, the Fiorentina striker on loan at Cagliari, sunk the opener two minutes before the break and the forward drafted in on loan from Wolves to replace him, Patrick Cutrone, added the second on 62 minutes.

Apart from Jack Taylor’s early dipping volley which drifted off-target by a yard and a half-chance for Nathan Collins straight after the restart, Ireland’s attacking threat was tame.

In the city of the famous tower, their defence too was easily knocked off-balance over the 90 minutes.

Ireland were badly exposed when Sottil slipped inside captain Conor Masterson to find the far corner with a stinging drive and again when the forward squared for partner Cutrone to add the second from close range.

Crawford added: “After we switched off for a moment to allow them to get inside and behind us to score, the message at half-time was to keep control of the game. That didn’t happen, and we weren’t as composed on the ball.

“It was disappointing to give the second goal away that cheap. Going 2-0 down against Italy presented us with a real uphill struggle.”