Aaron Connolly calls one on himself after defeat in Helsinki 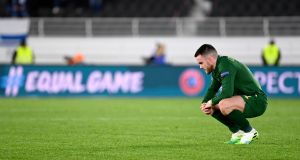 Aaron Connolly at the final whistle after Ireland’s defeat to Finland in the Uefa Nations League match at the Olympic Stadium in Helsinki. Photograph: Emmi Korhonen/PA Wire 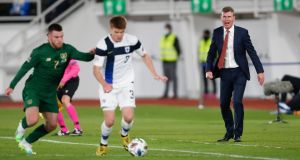 Having gone for goal when team-mates were crying out for him to pass late on, Aaron Connolly provided a fairly brutal assessment of his own part in Ireland’s loss to Finland with the 20-year-old suggesting his own determination to be the one who got the goal the visitors needed had cost his side dearly.

“I was selfish at times,” said the clearly disappointed Brighton striker. “I probably should have squared one for Daryl [Horgan] but I’ve tried to go from a tight angle and it’s those sorts of moments that cost us the game. I need to start looking at that side of my game, to gain awareness because it’s cost us I think.

“Obviously as a striker you need to be selfish,” he continued, “but at times you need to know when to shoot and when to pass and this was one of those where at the time I thought it was the best thing to shoot. Looking back on it, I definitely should have squared it.”

Overall, he said that it was “disappointing because it’s another game that we haven’t scored in and they’ve punished us. You feel like there’s going to be a break at some point for us, we’ll put one in but it doesn’t look like it’s coming at the minute.”

Connolly was still a little perplexed as to how Ireland had conceded the game’s only goal as he hadn’t seen it unfold but Stephen Kenny described the incident which started with a poor kick-out from Darren Randolph for Matt Doherty as “a present” before insisting that “you can’t legislate for mistakes sometimes”.

The manager said he was disappointed that his side was beaten having again failed to score but pointed to the “mitigating circumstances” that had left him without so many of his original squad as he sat down to select a starting line-up for his fifth game in charge.

“When Enda Stevens hit the bar it would have put us 1-0 up but then a minute later we were 1-0 down and that was difficult to take,” he admitted.

“Obviously, we have given a present away for the goal which hasn’t been like us because we’ve kept two clean sheets and we were good defensively here, including Darren Randolph, but you can’t legislate for a mistake sometimes.

“Darren’s been very consistent for us for a number of years and so it’s just one of those things that you have to accept. It was a disappointing goal to concede but it’s hard to believe that we didn’t score after it.

“Yeah there were periods of the game when we could have done better. But there was a bit of fatigue with some players playing their third game in six days. If you had everyone fit and playing but there are mitigating circumstances . . . so overall the players showed great commitment by pushing right until the end, trying to get that equaliser and showed a fair bit of quality.

“We are in the dressingroom there wondering whether we deserved to lose that game and the answer probably is that no, we didn’t, but we have lost and that’s probably not good enough from my point of view.

I think the players have shown real character, though, and the young players [Dara O’Shea and Jason Knight made their senior debuts while Jayson Molumby started again and Adam Idah came on] have shown a great mentality . . . I’d be optimistic that they will go on and be important players for Ireland.”