Fernandes shines and Neymar flops as Solskjaer’s side show courage, pace and verve 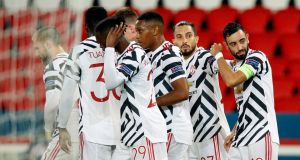 How Manchester United must wish they could play Paris Saint-Germain every week. Of course, given the current mood within the game, one imagines the Glazers are probably sitting down with the relevant European stakeholders to make that prospect an imminent reality. Yet at a deserted Parc des Princes, United conjured up a triumph that in many ways more impressive than their great heist of 2019.

Nineteen months have passed since the remarkable 3-1 comeback victory that put United into the last eight and sealed Ole Gunnar Solskjær’s ascent to the permanent job. Nineteen months in which a good deal of water has passed under the bridges of the Seine. And yet, until Bruno Fernandes’s first-half penalty the last goal PSG had conceded at home in the Champions League was scored by United themselves. That was a measure of their achievement.

For this was no heist. Indeed for Solskjær this may well go down as one of his most satisfying games as a manager: one that will have answered a few of his critics. If United trusted a little to luck in the first half when Fernandes was given a second go from the penalty spot, and early in the second half when Paris began to turn the screw, then can be no quibbles with the overall outcome.

United defended with intelligence and courage, they countered with pace and verve, and when the game began to tilt away from them Solskjær’s tactical switch – bringing on Paul Pogba and switching from a back five to a back four – turned things decisively back in their favour. United came with more than a plan. They came with a Plan B.

Naturally, the temptation will be to attribute this to the profligacy and fecklessness of last season’s beaten finalists, on which more later. And in fairness, you could scarcely have concocted a more favourable opposition for United to play right now: a team that play slow, patient football high up the pitch, but don’t really press and don’t really like to defend. In a way, it was as if United had been granted an opportunity to play themselves.

But even if the counterattacking tone of the game suited United, they executed to the letter. Marcus Rashford applied the final flourish, but in truth United enjoyed multiple strongholds. Alex Telles, who with his slick ponytail and trendy beard looks like he should be serving macchiatos in the Northern Quarter, enjoyed a fine debut at left wing-back. Axel Tuanzebe, in his first game for 10 months, left the field with Kylian Mbappé’s internet banking details. PSG have been beaten, outfought, outwitted before. But rarely have they played a team who showed them this little respect.

In a way, it was a game defined by its two creators. This may have been Fernandes’s first game as United captain, but he has been their de facto leader for a while now: dead-ball specialist and talisman, standard-bearer and standard-setter. And for all his quality on the ball, what distinguished him here, playing almost in a front three with Rashford and Anthony Martial, was his effort, his effervescence, his basic need to contribute.

“Contribute” is the operative word here. Neymar, by contrast, craves the ball, and here he was willing to drop as deep as he needed to get it. But his net contribution is often less clear. Swallowed up by United’s back five, with Fred and Scott McTominay ahead of them, too often Neymar tried to do it all himself, even if he was 40 yards from goal and there were better options around him. When he lost the ball, he simply walked away. Neymar does what he wants, which is sometimes – but not always – what the team need.

As he laboured his way through the game, you realised just how little of the pizzazz of his early years has survived into his late 20s. There were still the little tricks and twiddles, particularly early on, before the game got away from him, before the little kicks and frustrations began to chip away at his joy. Late in the first half, he was booked for dissent. Somewhere along the line – and this is perhaps the real travesty – one of the world’s most expressive, exuberant players simply stopped being fun.

In a way, this is the essential malaise of Paris: a deeply unhappy club, despite having all the money and silverware you could want. They are the kings sulking about not being emperors. Even in victory, nobody really seems to be enjoying themselves. Their coach, Thomas Tuchel, wears the manic scowl of a rogue doctor about to harvest your kidneys. He has been engaged in an increasingly fractious dispute with sporting director Leonardo over recruitment and probably won’t see out the season. They’ll still win Ligue 1 by 15 points.

United are another of those deeply unhappy superclubs whose discontent seems to follow them around like the weather. But it’s the memory and the strength of nights like this, when they shed their torments and discover themselves again, that can sustain them through the lean periods. The road ahead is long and uncertain. But they’ll always have Paris. - Guardian