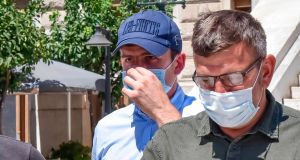 Harry Maguire has been found guilty of aggravated assault, resisting arrest and attempted bribery by a three-member misdemeanours court convening on the Greek island of Syros.

The £190,000-a-week Manchester United and England defender had denied all charges and said he would appeal. Maguire was given a prison sentence of 21 months and 10 days that was suspended on account of the charges being misdemeanours and and the court’s acknowledgement of his clear criminal record. His two co-defendants, who included his footballer brother Joe, were handed 13-month sentences.

After a dramatic day of legal proceedings, the court’s conclusion proved that in no way had it been persuaded by any of the defence arguments. Maguire had been named in Gareth Southgate’s latest England squad earlier on Tuesday, but has now been withdrawn.

Maguire said: “I have instructed my legal team with immediate effect to inform the courts we will be appealing. I remain strong and confident regarding our innocence in this matter – if anything myself, family and friends are the victims.”

The trial, days after Maguire’s arrest for allegedly assaulting a policeman during a late-night brawl on Mykonos, began with police prosecution witnesses alleging that the footballer said: “Do you know who I am? I am very rich, I can give you money,” as he allegedly pleaded to be set free.

The assertion by two police officers who appeared as key witnesses for the prosecution was among a host of unsavoury claims that emerged at a hearing that Maguire’s lawyer, Alexis Anagnostakis, had desperately tried to postpone arguing he had formally received the charge sheet only hours earlier.

In proceedings that from the outset took many by surprise, the judges overruled Anagnostakis’s appeal.

Instead it was ruled the trial – attended by the 27-year-old footballer’s father, Alan – would begin as planned on Syros, the capital of the Cycladic isles to which Mykonos belongs. With police surrounding the building in searing temperatures, the case opened with several hours’ delay after officials had posted on the court’s notice board the names of the three suspects: Harry Maguire, his older brother Joe and Christopher Sharman, a friend. They too vigorously denied the charges and can also appeal.

Maguire had flown to Mykonos earlier in the week for a holiday that included teammates Marcus Rashford and Brandon Williams, his fiancée Fern Hawkins and his younger sister Daisy.

The suspects were forced to endure two nights in police cells following the brawl, which is said to have erupted after rival fans publicly taunted the footballer on a day of heavy drinking in a beach bar on the famous party island and after Daisy was allegedly targeted.

The defender was alleged to have attempted to bribe law enforcers after being taken to Mykonos’s police station in the wake of the brawl. As the severity of the incident hit home, the centre-back was described by one of the two police officers as not only resisting arrest but pleading to be released. “Please, let me go. I am very rich. I can pay. I am the leader of Manchester United,” he allegedly said.

Another on-duty officer who had rushed to the scene to break up the fight described how he was pushed so hard by the footballer as he tried to detain him that he fell on his back and had to be injected with painkillers.

Anagnostakis, who had flown in from Athens to represent the trio, disputed the account, telling the court that Harry Maguire was deliberately “kicked” and shoved by police officers who also attempted to demean him saying “your career is over”. His clients, he said, had acted in self-defence and had not realised that the men who had come to break up the fight were police officers because not all were in uniform.

Anagnostakis, a leading human rights lawyer, who often defends Britons who get into trouble in Greece, said the brawl had been set off when Maguire learned his sister had been attacked by two men. Describing the pair as Albanians he said they had deliberately “injected” the 20-year-old with a substance that had caused her to instantly faint.

Ashden Morley, a friend of the Maguires called by the defence to corroborate the incident, said the group suspected she had been injected with what was described as a rape drug after Hawkins noticed Daisy’s eyes “rolling back in her head”. The group had called the driver of their rented van to take them to the island’s health clinic but found themselves being driven to the police station at the direction of undercover officers, the lawyer claimed. Undercover officers are commonplace on Mykonos to ensure restrictions to contain the spread of coronavirus are being upheld.

Some of the most dramatic moments in the courtroom came when Morley, aged 27, a quantity surveyor, said the group thought they were going to be kidnapped by men chasing them in cars behind the mini-van. “Our bus door opened and five or six males tried to force us off by physically pulling us,” he said recounting the scenes and fear that they were about to be “held at ransom”.

Manchester United said in a statement after the verdict: “Harry Maguire pleaded not guilty to all of the misdemeanour charges made against him and he continues to strongly assert his innocence. It should be noted that the prosecution confirmed the charges and provided their evidence late on the day before the trial, giving the defence team minimal time to digest them and prepare. A request for the case to be adjourned was subsequently denied.

“On this basis, along with the substantial body of evidence refuting the charges, Harry Maguire’s legal team will now appeal the verdict, to allow a full and fair hearing at a later date.” - Guardian