Blues close to agreement with Leverkusen, Brazilian out of contract after leaving PSG 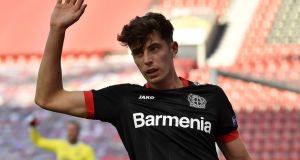 Chelsea are closing in on a deal for Bayer Leverkusen’s Kai Havertz. Photograph: Martin Meissner/Getty

Chelsea are on the verge of an agreement with Bayer Leverkusen over a £90 million (€104m) deal for Kai Havertz and are confident about signing Thiago Silva on a free following the defender’s exit from Paris Saint-Germain.

Frank Lampard has focused on reshaping his attack since becoming Chelsea’s manager last year and although he has already spent big on Hakim Ziyech and Timo Werner, the chance to bring Havertz to Stamford Bridge is regarded as too good to ignore. The Germany winger is one of the best young talents for Europe and has been targeted in the past by Barcelona, Bayern Munich, Liverpool and Real Madrid.

Chelsea, who were under a transfer embargo last year, are giving Lampard strong backing as they look to close the gap on Liverpool and Manchester City at the top of the Premier League. They are close to strengthening at left-back by buying Leicester’s Ben Chilwell for £50m (€58m), have offered Silva a deal and are poised to sign Havertz after negotiations with Leverkusen over a fee for the 21-year-old.

Havertz, who has agreed terms with Chelsea on a five-year deal, had made it clear he wanted to leave Leverkusen this summer following their failure to qualify for the Champions League. Chelsea had an initial offer of €65m plus €15m in add-ons rejected last week but negotiations over a price have since been positive.

Chelsea are expected to pay an initial €80m plus €20m in add-ons for Havertz, who is international teammates with Werner. The deal would represent a coup for Lampard, who was keen for greater quality in attack after losing Eden Hazard to Real Madrid last summer. Ziyech brings creativty after joining from Ajax, Werner scored 34 goals for RB Leipzig last season and Havertz would add a further layer of class.

Although there is some surprise at Chelsea targeting Havertz, Lampard often felt his team lacked cutting edge against negative opponents. Chelsea, who bought Ziyech for £37m (€43m) and Werner for £47.5m (€55.2m), needed to widen their options in attack after relying on Hazard for so long. Pedro and Willian have left on frees, joining Roma and Arsenal respectively, and Ruben Loftus-Cheek, Christian Pulisic, Callum Hudson-Odoi, Mason Mount and Tammy Abraham remain inconsistent at the highest level and suffered injuries last season.

The need for more depth further up the pitch does not mean Chelsea have forgotten they need to improve their defence. They conceded 54 goals last season and have looked at RB Leipzig’s Dayot Upamecano, Atlético Madrid’s José Giménez, Brighton’s Ben White and West Ham’s Declan Rice. They are also interested in the Atlético goalkeeper Jan Oblak as a potential replacement for Kepa Arrizabalaga.

However those players will be difficult to sign this summer and Chelsea were presented with a quick fix when offered Silva last week. The Brazilian centre-back, whose contract expired following PSG’s defeat by Bayern Munich in the Champions League final, is giving serious consideration to Chelsea’s offer of a one-year deal with the option of another year and would provide Lampard with more experience. Fiorentina have offered Silva, who turns 36 next month, a two-year deal.

Left-back has also been a problem position for Lampard and he is prepared to sell Emerson Palmieri, who has been strongly linked with Internazionale. Emerson has not agreed anything but Chelsea have pressed ahead with a move for Chilwell. The 23-year-old England international is having a check on a heel injury on Monday. While the deal has not been finalised, Leicester could replace Chilwell by moving for Ajax’s Nicolás Tagliafico.

Chelsea are looking to raise funds by shifting unwanted players and are close to sending Tiémoué Bakayoko on loan to Milan, and the arrival of Havertz would raise doubts over Ross Barkley’s future. Rennes are interested in signing Fikayo Tomori on loan. - Guardian