Ken Early: all those millions and PSG beaten by one of their own 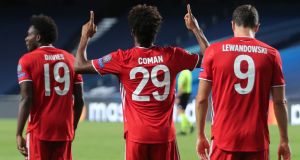 Football has a cruel sense of humour. On PSG’s first appearance in the Champions League final, they used two forwards who each cost more in transfer fees than the entire opposing team, and ended up losing it to a goal scored by one of the many PSG academy players who have left Paris because they knew they would never have a chance of getting into the team.

Thomas Tuchel is one of the modern coaches who likes to come up with bespoke plans for each game, except in Paris he is managing the sort of team where the coach is essentially meant to stand back, offering occasional applause, and let the players get on with it. In the semi-final these players had run riot against RB Leipzig and Tuchel’s former protege Julian Nagelsmann, in the end making the 33-year-old look a little foolish. Sit down, tight-suited man: it’s not about you.

Maybe Hansi Flick is more suited to managing a superclub than these intense younger coaches. He’s spent most of his career as assistant to the national team manager, he knows how to merge reassuringly into the background.

He’d had to resolve a classic coach’s dilemma in the lead-up to the match. Did he stick with the high line that had served Bayern so well on the 21-match winning streak leading up to the final? Or did he make some kind of allowance for the fact that the other team had Neymar and Mbappé?

If he asked his defence to drop back a few metres, then that would open up space in midfield, releasing the pressure that is so fundamental to Bayern’s game. And yet, if you were picking a team consisting of the eleven most dangerous counter-attacking players in the world, it would include Neymar and Mbappé.

Plan A had worked against Lyon, who had in previous rounds beaten Juventus and Manchester City - two of the pre-tournament favourites. Paris had beaten Dortmund, Atalanta and Leipzig - opponents of the second rank. Why give them any more respect than Lyon? On the other hand, Lyon’s forwards, Memphis Depay and Karl Toko Ekambi had missed several chances in the first 20 minutes - the sort which Paris’ forwards would surely score.

If you played the same way, gave up the same sort of chances and got filleted by these world-class finishers, people are going to say: really, coach, might not some sort of . . . plan . . . have been in order?

In the end, the calculation is as much political as tactical. In a final there are two basic outcomes: you win or you lose. If you win, it’s all good. The winning coach is always a genius. Losing is more complicated. Some ways of losing are worse than others. What kind of loser would you rather be? Would you rather be the guy who trusted his players to execute one last time the game plan that had been so successful so many times, only to see them beaten by opponents who simply happened to play better on the night?

Surely that’s better than being the guy who lost the game after losing his nerve, who confused his players by neurotically second-guessing himself and making changes in response to what he imagined the danger would be.

Flick decided he’d rather die with his boots on. If he was going to lose a Champions League final, at least he would not be accused of overcomplicating it. That, of course, had been the charge when Pep Guardiola was the Bayern manager, three years that brought total dominance in the league, but no appearances in the Champions League final. Flick decided to go back to basics: the fit-again Kingsley Coman in for Perisic, otherwise no changes to personnel or system.

Tuchel read Flick’s intentions correctly and set PSG up with seven in defence and three in attack, to take advantage of the space he knew Bayern would give up on the counter. If you had told the Paris coach before the match that each of his front three would have a clear shot at goal in the first half, he would have been pretty optimistic that they would be finishing the night as European champions.

But PSG missed the chances. Mbappe put Neymar through, but Neuer saved. Neymar put Di Maria in, but the shot on his weaker right foot went over the bar. The most threatening moment came at the end of the half: Alaba’s error opened it up for Mbappé, but with the goal at his mercy he sent a shot of mystifying weakness at Neuer.

The last few minutes of the first half had been the most fluid and exciting of the game. In the second half, Bayern started to get a grip of the ball, the opponent and the occasion. PSG’s tactics had let them take the initiative and gradually they started to make that advantage count. Their structure, their method, their automatic was too strong. Bayern played simply, passing the ball, working it into the final third, putting it into PSG’s box. PSG, starved of possession for long spells, snatched at their passes when they won it back.

They still had half an hour to rescue the game after Bayern took the lead - Coman arriving at the back post to apply a careful header to Kimmich’s curling cross, as four of his red-shirted team-mates converged on the Paris six yard box. But it’s hard to switch effortlessly between styles in the middle of a final, especially when you are tired after running an hour on an August night, and up against physically stronger opponents who are determined to close it out. PSG have not played a side of Bayern’s quality all season.

Flick’s team are one of the most irresistible sides to win the competition in years - with strength and world-class quality in every position. Even still, they had to be lucky to win it. Flick, the interim appointment who has taken them all the way, had the wisdom to accept that, and plan accordingly. Even a great side can’t control all the variables. Better to play your game, and trust that fate will be on your side.