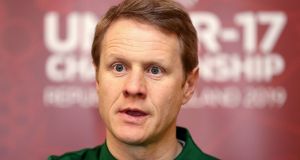 Colin O’Brien: “We are in good shape and ready for our second game of the tournament.” Photograph: Bryan Keane/Inpho

The Republic of Ireland Under-17s are itching to get back into action in the 2019 European Under-17 Championships as they prepare to take on Czech Republic in the RSC, Waterford on Monday.

Ireland drew their first game in Group A following the concession of a late equaliser to Greece, but their overall performance – in front of 4,265 spectators in Tallaght Stadium – has given them the belief that they can advance in this competition.

Training has gone well with a few players recovering from slight knocks, while head coach Colin O’Brien is keen for his squad to embrace the opportunity of featuring in this tournament on home soil as they set about taking on Czech Republic.

Ireland have a full squad to choose from with goalkeeper Jimmy Corcoran available after serving a ban for the draw with Greece.

“We are in good shape and ready for our second game of the tournament. The players are upbeat and they know what is at stake with everything to play for in Group A after all four teams drew in the opening round,” said head coach Colin O’Brien.

“We have always received a great welcome in Waterford and the energy from the crowd will be important, as it gave our players a boost in Tallaght Stadium last Friday. We hope that they can experience the same again in the RSC on Monday night.

“There were a lot of good points to take from our performance against Greece, especially some of our patterns of play, our pressing, and our counter-attacking. Now, we have an opportunity to take those positives into our next game and add even more to them in order to secure victory.”