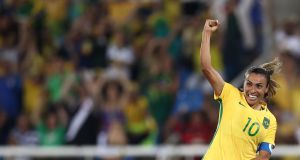 The rapid growth of the women’s game will be recognised at this year’s The Best Fifa Football Awards with two new categories, a prize for the best female goalkeeper and the selection of a Women’s World XI.

Now in their fourth year, the awards will be held at Milan’s historic La Scala opera house on September 23rd after London staged the last two editions.

In a statement the governing body’s deputy secretary general, Zvonimir Boban, said: “Fifa is certain that France will host a groundbreaking edition of the Fifa Women’s World Cup this year, so I cannot think of a better moment to introduce these new awards.

“It is yet another step in the right direction to raise the profile of women’s football.”

The addition of two new awards brings the total number of categories to 11, with male and female versions of best player, top coach, best goalkeeper and world XIs, the last of those being decided by a vote organised by FIFPro, the global players’ union.

The three remaining prizes are the Puskas award for the year’s best goal, a supporter’s award and an accolade for fair play.

England, ranked third in the world, are among the favourites for the Women’s World Cup this summer, where they will be joined by 20th-ranked Scotland.

Croatia and Real Madrid midfielder Luka Modric was the big winner at last year’s The Best Fifa Football Awards, as he became the first player to beat both Lionel Messi and Cristiano Ronaldo to the prize for a decade.