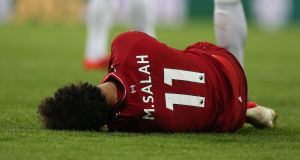 Mohamed Salah and Roberto Firmino will both miss the second leg of Liverpool’s Champions League semi-final against Barcelona on Tuesday, Jürgen Klopp has confirmed.

Salah, Liverpool’s leading scorer this season with 26 goals, must sit out the return leg at Anfield having suffered concussion in an accidental collision with Newcastle goalkeeper Martin Dubravka on Saturday.

Under Fifa protocols a player can not return to competitive action for at least six days after a head injury. While that enables the Egypt international to feature in the potentially decisive league match against Wolverhampton Wanderers on Sunday, he can play no part in Liverpool’s attempt to overturn a 3-0 deficit against the La Liga champions from Catalonia. Firmino remains sidelined with the groin muscle injury that forced him to miss the dramatic 3-2 win at St James’ Park.

“Both are not available for tomorrow,” Klopp said on Monday. “It is a concussion and that means he will not even be allowed to play. He feels OK but that is not good enough from a medical point of view. He is desperate [TO PLAY], but we cannot do it.”

The Liverpool manager admitted the absence of two-thirds of his first-choice attack complicates an already formidable task against Barcelona.

“There is hope and it is football,” he said. “We are far away from giving up but we are not in a situation where we say it will happen 100 per cent. But it is football.

“Look, two of the world’s best strikers are not available tomorrow and we have to score four goals against Barcelona to go through in 90 minutes. It doesn’t make life easier but as long as we have 11 players on the pitch we will try. That’s what we want to show, nothing else. We want to celebrate the Champions League campaign, either with a proper finish or another goal. That is the plan: just try and if we can do it wonderful and if not, then fail in the most beautiful way.”

Klopp was asked what he would change from his first leg approach to contain Lionel Messi, who scored twice at the Camp Nou last week. “To delete the word ‘almost’,” he replied. “That’s the plan. You have to be perfect to beat them, and we should try that.