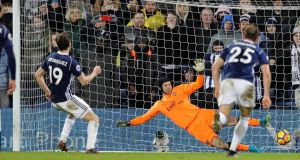 A landmark game for Arsène Wenger ended in a mixture of anger and frustration as West Bromwich Albion salvaged a draw with a controversial penalty two minutes from time. Wenger, who was taking charge of a record 811th Premier League match, reacted furiously to Mike Dean’s decision to penalise Calum Chambers for handball only five minutes after Alexis Sánchez appeared to have helped win the game for Arsenal.

The protests from the Arsenal players continued after the final whistle, two points having slipped through their fingers, yet Wenger’s side were their own worst enemy on an afternoon when they went through the motions at times. Sánchez hit a late free-kick that found the net via a heavy deflection off James McClean, who had turned his back in the Albion wall, and with only seven minutes remaining Arsenal should have been able to see the game out.

Albion, however, equalised through Jay Rodriguez’s penalty, which lifted the Midlands club off the bottom of the table on goal difference. The reaction of the home fans at the end suggested it was very much a point gained, although their search for a first victory since August goes on. Albion have now failed to win in 19 league games and Alan Pardew will hope that run can come to an end on Tuesday at West Ham United, who sit one place above them.

The opening 45 minutes here were scrappy, littered with mistakes and produced few moments of quality from either side. Arsenal looked disjointed: there was no real tempo to their game and far too many passes went astray. Jack Wilshere, who was starting a fifth successive Arsenal league game for the first time in four years, hit one crossfield ball straight into touch and that rather summed things up.

Arsenal had plenty of possession in the first half but rarely looked like doing anything meaningful with it – there was nothing incisive about the way they attacked. Their buildup play was slow, prosaic and predictable, playing into the hands of an Albion side that would have been vulnerable to pace.

Alexandre Lacazette had an early effort deflected wide and Arsenal’s only other notable first-half chances fell to Alex Iwobi. Brought into the side in place of Mesut Özil – who was ruled out with a slight knee injury but could be back in time to face Chelsea on Wednesday – Iwobi curled his first opportunity wide and forced Ben Foster into an untidy but ultimately effective save with his second effort.

At the other end, Albion enjoyed some success on their right flank, where Matty Phillips’s trickery caused Arsenal problems. Phillips had the beating of Sead Kolasinac, who departed with a knee injury after 37 minutes, and the winger delivered a few dangerous crosses that were crying out for a centre forward to attack the ball with more conviction. Rodriguez did get on the end of one delivery, in the sixth minute, but Petr Cech was able to save comfortably.

The game had reached the hour-mark when Arsenal finally put together one of their trademark slick one-touch moves, and that passage of play should have led to the breakthrough. Wilshere played the ball into the feet of Lacazette, who had a clear sight of goal after a lovely exchange with Iwobi on the edge of the area. Foster, however, stuck out his boot to block Lacazette’s left-foot effort.

The French striker found another opening two minutes later but, under pressure from Jonny Evans, toe-poked a reverse pass from Sánchez narrowly wide of the near upright.

Although Pardew’s substitutions suggested that he was digging in for a draw and Albion’s threat was largely confined to the counterattack, Rodriguez did trouble Cech with a drive from the edge of the area that the Arsenal keeper parried.

Then came Arsenal’s rather fortunate goal. Brought down on the edge of the area by Gareth Barry, Sánchez took the free-kick that followed and although it was poorly hit, the ball struck McClean and sailed past Foster. Albion must have feared the worst at that stage but Rodriguez’s penalty grabbed a precious point.