Salah brace sees Liverpool come from behind against Leicester 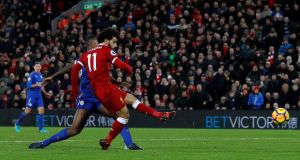 Mohamed Salah scored twice to equal Roger Hunt’s club record for goals scored before the turn of the year as Liverpool came from behind to beat Leicester 2-1.

The Egypt international took his tally to 23 for the campaign, with 17 in the league, with a second-half double to reach the same mark set by Hunt in 1961-62.

Liverpool had been trailing to an early goal for Jamie Vardy, who set a Leicester record of his own by becoming the first Foxes player to score in five successive matches against the Reds.

Vardy has long been a thorn in the side of the Merseysiders and he took his tally to seven in eight appearances against them, but Jurgen Klopp’s side have someone in even better form and they needed him to finally overcome another nemesis in Claude Puel.

The former Lyon and Southampton manager was six matches unbeaten — including four clean sheets as Saints boss last season — heading into the game and looked to be working his magic again as early as the third minute.

With soon-to-be new signing Virgil van Dijk watching from the directors’ box, the auditions began for who should partner the world’s most expensive defender when the £75million man completes his move from Southampton on Tuesday.

Joel Matip was first to fluff his lines when his misplaced pass was picked up in midfield by Vicente Iborra, who slid a ball inside Reds left-back Andrew Robertson.

Riyad Mahrez, with a couple of yards head start, had plenty of time to square for Vardy to fire into an empty net.

Since August 2014 no one has scored as many goals as Vardy’s 22 in 41 appearances against the Premier League’s top six.

The television cameras immediately switched to a capture a straight-faced Van Dijk in the Main Stand, as if anyone needed reminding how great the expectation on his shoulders is.

Van Dijk’s arrival is intended to shore up a side who score goals for fun but Salah, Philippe Coutinho, Roberto Firmino and Sadio Mane struggled for a breakthrough.

Salah had four decent chances, Coutinho and Firmino had long-range efforts saved by Kasper Schmeichel, Mane a goal correctly ruled out for offside with Joe Gomez’s drive from distance just dipping over.

When Schmeichel did fumble the ball once at a corner Matip was slow to react and his shot was blocked. Robertson also had optimistic claims for a penalty turned down.

Eight minutes into the second half Liverpool were level when Mane’s clever back-heel picked out Salah, who held off Christian Fuchs and Daniel Amartey to pick his spot beyond Schmeichel, who soon after was beaten by the Egyptian’s lob only to be saved by the roof of the net.

Wilfred Ndidi shot just wide but it was a rare chance for the visitors, who surprisingly replaced both Vardy and Mahrez with 17 minutes to go.

Almost immediately Liverpool took the lead with another back-heel, this time from James Milner, allowing Salah to hold off and then turn Harry Maguire before beating Schmeichel inside his near post for his 17th goal in his last 17 appearances.