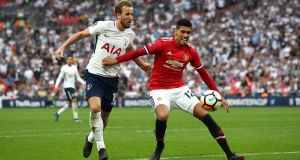 Mauricio Pochettino has branded the Football Association an embarrassment for its tweet that mocked the performance of Harry Kane in last Saturday’s FA Cup semi-final.

The Tottenham Hotspur striker was well-marshalled by Manchester United’s Chris Smalling at Wembley and after the game, which United won 2-1, the official FA Cup account tweeted: “What’s that in your pocket, Chris?” and linked to an unrelated video of the defender saying: “Harry Kane.”

The tweet was deleted and the FA apologised to both Tottenham and United “for any offence caused”. But Pochettino has now laid bare the depth of the surprise and ill-feeling at Spurs. The manager was incredulous that the FA should have goaded a player that will be a key component of Gareth Southgate’s England squad at the World Cup finals in Russia. Kane is expected to captain the team.

“It was embarrassing, no?” Pochettino said of the tweet. “It was a shame, because the FA is English football and Harry is a potential captain at the World Cup. It is difficult to understand, very difficult, and they have apologised about that.

“The situation disappointed me. The fact it happened and then they apologised after a few days. But move on. That is the reality. We need to protect our assets, our English players, our young players.”

Kane has endured a testing period. He was also ribbed after he fought to be credited with a goal that brushed in off him at Stoke City on April 7th. The PFA’s chairman, Ben Purkiss, joked at the Player of the Year awards dinner last Sunday that “Kane is so prolific, he is able to score without touching the ball”.

Pochettino said: “Harry was very sad [about the FA’s tweet]. But he’s strong in his mind. He’s moved on. We are helping him to move on. It was a mistake and he needs to move on quick.”

In the wake of Tottenham’s defeat, their eighth successive FA Cup semi-final loss, Pochettino raised eyebrows when he said “with me or another” when talking about his club’s plan going forward.

Some interpreted that comment as a warning to chairman Daniel Levy, but the boss insisted there was nothing sinister about it.

“For me I am going to say the same, Tottenham is doing a fantastic job, developing an amazing project.

“Only I wanted to tell you that it’s a long-term project, that is not going to change with us or another coaching staff.

“It’s not a message to send to someone, it was only the context of the question and I explained.

“The project is so strong and we believe in this project. The club cannot behave like different clubs.

“I think that the project that we created all together, the club needs to keep going, pushing on together in this direction trying to achieve all the things that the club wants.

“It’s not a message for someone. It was what I feel and what I told you.”