FA apologises for tweet about Chris Smalling and Harry Kane 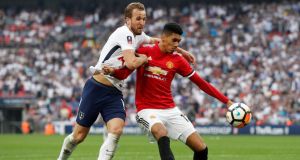 The Football Association has apologised to Tottenham and Manchester United for a tweet sent on the official FA Cup account following the club’s semi-final clash at Wembley on Saturday.

United won the game 2-1 and shortly after full-time, a tweet was posted which appeared to poke fun at the performance of Spurs and England striker Harry Kane.

In a mock-interview style, the tweet read: “Me: What’s that in your pocket, Chris?” before posting a video of United defender Chris Smalling saying: “Harry Kane”.

The FA confirmed on Monday that Spurs and Manchester United had both received a message from the governing body.

“We have written to both clubs to apologise for any offence caused,” an FA spokesperson said.

Kane endured a quiet afternoon at Wembley as United came from behind to book a place in the FA Cup final and inflict an eighth straight semi-final defeat on Spurs in the process.

Both he and fellow England international Smalling stopped to speak to the media after the game, with Kane claiming his performance was not related to a recent ankle injury.

“That’s people’s opinion,” he said when asked if he had returned from the problem too soon.

“People are always going to look for something to say when maybe you’re not firing at your best. At the end of the day, I’ve still scored two in my last four, it’s not the worst in the world.

“But when you set standards, people are going to look for things when you’re not at them. I’m the same. I want to be better, I want to do better.

Smalling, meanwhile, said he enjoys coming up against a striker of the calibre of Kane.

“I love my battles against H,” the United defender said.

“I don’t think he’s scored too many against me so long may that continue. It’s nice testing yourself against the best because certainly this year he’s been one of the best.”