Everton’s Eliaquim Mangala out for the rest of the season 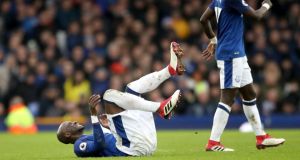 Everton’s Eliaquim Mangala (left) lies injured on the pitch at Goodison Park. Sam Allardyce has said that the will likely miss the rest of the season. Photo: Nick Potts/PA Wire

Eliaquim Mangala looks set to miss the rest of the season with a knee injury, Everton boss Sam Allardyce has said.

The French centre-back, who is on loan at Goodison Park from Manchester City, underwent surgery earlier this week after suffering the injury against Crystal Palace last month.

Allardyce said at Friday’s press conference: “We assessed the scans and we’ve seen there is a little bit more damage than expected.

“I think it is highly unlikely we will see him again this season. Manchester City want us to rehabilitate him so we will do that.”

Allardyce also addressed speculation he could leave the club at the end of the season.

“At the moment we are in a very good position. I am slightly surprised about the situation (speculation) but you can look at the two differences between us: good at home and not good enough away from home.”

He also hit back at criticism of the style of play under his charge.

“Style of play is only brought up by previous people making out from many years ago we were playing this type of football, which is 10 years ago past,” he said.

“People speculate on it with no complete information at all.”