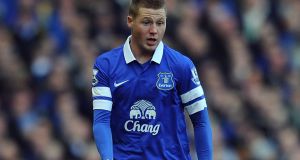 Everton midfielder James McCarthy is expected to rejoin his side in the next few days. Photograph: Chris Brunskill/Getty Images

Everton midfielder James McCarthy could be back in action in time for the club’s preseason, according to his club manager Sam Allardyce who says the midfielder will be back in Merseyside to start work on the next phase of his rehabilitation during the coming days.

“It is down to the specialist and them saying if and when James can start moving forward,” said Allardyce at his press conference to preview Saturday’s lunchtime game at Burnley. “The specialist will guide us on how far we can go and with a bit of luck we can look forward to James starting the next preseason with us.

“He has had some time back at home. He will probably rejoin us in the next few days on a regular basis to start getting some mobility into his ankle, particularly because it has been in a set position for such a long time.”

A return to training by the summer might put McCarthy in contention to be available for the first of the Republic of Ireland’s Nations League games at the start of September but it would be a remarkable achievement for the 27-year-old who only suffered his double fracture on January 20th and underwent surgery four days later.

Séamus Coleman’s recovery from the similar injury he suffered in the game against Wales on March 24th appears to have been more or less textbook but he did not play competitively for the first time again until January 31st. Alan Judge, meanwhile, suffered a couple of setbacks as he sought to get back from his double break and ended up being sidelined for more than a year and a half.

Coleman, as it happens, is likely to miss the Burnley game due to a thigh strain.

Seán Maguire, meanwhile, says he can see “light at the end of the tunnel”, as he moves closer to a return from a protracted absence with a hamstring injury that has sidelined him since October. The former Cork City striker has been back around the Preston North End first-team squad for a week or two now but feels that the part he played in a behind-closed-doors game this week against Burnley marks a significant step forward for him.

“You can train as much as you want but match fitness is totally different,” said the Irish player in an interview with his club’s website. “It was a good, competitive game, they had a lot of experienced players and so did we so it was a good game. I’ve got those minutes in the tank now and it’s about moving forward with that.

“The last couple of months have been about getting that fitness up with the fitness coach Tom Little and getting a bit of air in my lungs. Now I’m back in training with the squad and to get some minutes in the tank against Burnley was brilliant. Just to get the matchday feeling back, waking up in the morning and knowing you had a game, I can see the light at the end of the tunnel now and I’m just looking forward.”

Maguire is still some way off actually returning to competitive action but he is anxious to make a contribution before the end of the campaign and to recover the sort of form that he was showing before picking up the injury.

“I want to get back to where I was before,” says the 24-year-old whose side sit four points off the play-off places ahead of Saturday’s game at Bolton, “that’s getting myself back in the team and doing as much as I can for the squad and hopefully get back in to getting goals and assists.”