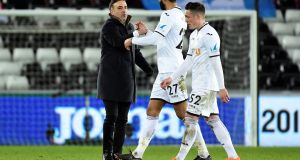 Carlos Carvalhal saluted his players and told them to dream of Wembley after booking Swansea’s first FA Cup quarter-final appearance for 54 years.

Swansea will entertain the winners of Wednesday night’s replay between Tottenham and Rochdale in the last eight next month.

Their last appearance at this stage of the competition came in 1964 when Bill Shankly’s Liverpool were beaten 2-1 at Anfield — the year before Carvalhal was born.

“I have ‘Carlos had a dream’ written here in my jacket,” Carvalhal said, pointing to embroidery inside his blazer after second-half goals from Jordan Ayew and Nathan Dyer had settled the fifth-round replay.

“The main competition for us is the Premier League, but we will have a week to prepare for the quarter-final, which is important, and we are near (to the end of the competition) now.

“We have 90 minutes to try to get Wembley (for the semi-final) so let’s see what happens.”

Carvalhal is confident that Swansea can balance their battle for Premier League survival — they are currently in the relegation zone, albeit on goal difference - with their FA Cup campaign.

This was their sixth successive home win in all competitions, something they have not managed since 2007 and a promotion-winning season under Roberto Martinez.

“I am very happy and very proud of my players,” Carvalhal said after the victory over his former club.

“I am happy we have achieved this. Now we will play either Rochdale or Tottenham at home and we could go to Wembley, so we are in a very good position.”

Swansea struggled to break Wednesday down during a turgid first half played in freezing sub-zero conditions.

“Sheffield Wednesday created problems for us in the first game and also again,” Carvalhal said. “But I thought we had more opportunities in this game.

“We needed a bit more intensity and a bit more speed in the second half, and that’s why we put Jordan and Martin Olsson on at half-time.

“We felt after a couple of minutes that we could score and we did that.”

Jacob Butterfield and Lucas Joao both tested stand-in Swansea goalkeeper Kristoffer Nordfeldt in the first half.

And Owls manager Jos Luhakay felt his Sky Bet Championship side were punished for failing to convert early opportunities.

“The first half was in the balance,” Luhakay said.

“We had two or three good chances to score but we did not do so.

“In the second half we did not make the pressure we like to do, Swansea got the goal and we could not come back in the game.”