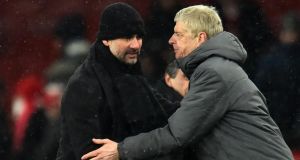 Pep Guardiola came out in support of Arsenal boss Arsene Wenger after his Manchester City side doled out another sound beating to increase the pressure on the Frenchman.

After losing Sunday’s Carabao Cup final 3-0, the Gunners could not find any level of retribution as they were beaten by the same scoreline.

Arsenal, meanwhile, are now 10 points off the top four and a massive 30 points adrift of the champions-elect.

With seven defeats from 13 games across all competitions in 2018, Wenger’s position has again started to be questioned by supporters and pundits alike.

But Guardiola suggested his counterpart would make the right decision over his own future, given his extensive history at Arsenal.

“He knows my admiration for him,” he said of the Frenchman.

“He knows the club, he knows the Premier League, he knows his players. And I’m sure he’s going to take the right decision, for the club, for him, for the players, for everybody.”

The game at the Emirates Stadium went ahead despite snow and freezing conditions across the country — but the hosts simply could not weather Manchester City’s storm.

“I think it was a game with a team of top quality and full of confidence against us who were low on confidence,” the Arsenal boss said.

“I knew before the game the first half would be difficult for us after what happened on Sunday and we needed at least to be level at half-time.

“When your confidence is not at the best, the first thing that goes is your fluidity in the movement, the spontaneous side of the game.

“You could see that tonight. I don’t deny their quality because they have top quality, but we’re going through a difficult patch at the moment. That’s part of football as well unfortunately.”