Everton fans turn on Sam Allardyce after loss to Burnley 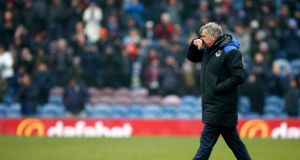 Everton fans vented their frustration with manager Sam Allardyce during Saturday’s 2-1 loss at Burnley, leaving the much-travelled boss vowing to turn the club around.

Although Everton have climbed clear of relegation trouble under Allardyce, the fans remain unhappy with the quality of football and turned on the manager in the 68th minute when he took off striker Cenk Tosun, who had put the Toffees ahead at Turf Moor.

The chants, personal in nature, were aimed directly at Allardyce, who replaced caretaker David Unsworth in December after Ronald Koeman had been sacked in October with the team in the relegation zone.

“It happens,” said Allardyce of the crowd reaction.

“My job is not what the fans are saying or not saying. This is only his second start ... We replaced him with fresh legs which is Oumar (Niasse) who has scored more goals recently than anyone else.

“It hasn’t worked by the fact we haven’t played well enough in the second half to create enough chances. Everyone has an opinion on a game of football.”

The 63-year-old said he, too, was frustrated by his team’s fifth straight away loss.

“I feel worse than the fans – they won’t believe this – but it’s my responsibility. I go home and say to myself ‘How do I put this right?’ For me to see the players under-perform in the second half is very disappointing for me. It’s my problem to sort it out,” he said.

“We lost it by not scoring the second goal when we had clear, clear opportunities. At least three in the first half.

“Burnley hadn’t won in 11 and if we went 2-0 up it would have been hugely difficult for them.

“That’s five away defeats on the trot. It’s simply not good enough.”

Everton’s disappointing day was made worse by the late sending off of skipper Ashley Williams, who lashed out at Ashley Barnes in a crowded penalty area and was handed a straight red card.

“Ashley Williams getting sent off sums our day up. It shouldn’t happen, he’s swung his arm and he’s an experienced player,” he said.

“No complaints with the red card, you can’t do that. It was unprofessional from Ashley Williams,” added Allardyce, who suggested the Welsh international would be fined.

“There is the fines system which is in place for everyone in the country, which is across the board. Straightforward for everyone to follow so there is no need other than to go through the system. Silly thing,” he said.