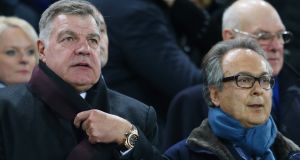 As a football fan and chartered certified accountant Farhad Moshiri is unlikely to find cause to celebrate his two-year anniversary as Everton’s major shareholder on Tuesday. The 62-year-old has invested almost a quarter of a billion pounds into Goodison Park since ending Bill Kenwright’s long-running search for a financial saviour. Tentative progress on a new stadium, deeply disillusioned fans and what in many respects is the worst Everton team this century represents a meagre return for his money.

Kenwright, the Everton chairman, cited “football knowledge, financial wherewithal and true blue spirit” as principal reasons for embracing the British-Iranian billionaire when his arrival was announced on February 27th 2016. Having paid around £87.5 million (€99m) for a 49.9 per cent shareholding, one that is expected to increase over time, Moshiri has loaned Everton £150m with no fixed repayment date. The loan has enabled Everton to spend significantly on players, clear £28.4m of debt, reduce annual interest charges, fund improvements to the Finch Farm training ground and their old stadium, while preparing for the new with £9.1m spent on securing the site and initial planning works at Bramley Moore dock.

The financial wherewithal of Everton’s major shareholder is not in question. Nor is the enthusiasm and ambition he has brought to the club since selling his Arsenal shares to his business partner Alisher Usmanov. However, his football knowledge, or at least the advice given to Moshiri in his first leading role at a Premier League club, has yet to vindicate Kenwright’s reasoning for bringing him on board.

Under Moshiri Everton have finally accessed the finances that had eluded them throughout the Premier League era and were regarded as key to ending the club’s 23-year-old trophy drought. Financial wealth has instead ushered in an era of woeful mis-spending and recruitment at various levels. Far from following the Tottenham Hotspur model and challenging the established elite for Champions League qualification, Everton have slipped into reverse. The disconnect between team and supporters is glaring and encapsulated by the boos that greeted Morgan Schneiderlin’s introduction against Crystal Palace recently. He was singled out for a perceived lack of commitment, passion and effort by many Everton fans but is not the only expensive, well-paid signing consistently to underachieve.

Since Moshiri’s arrival Everton have spent almost £277m (€314m) on 18 players. They were the fifth-highest spending club in Europe last summer at £149.1m and, according to CIES Football Observatory, the sixth highest spenders across the continent over the past two transfer windows. The disastrous results explain why Steve Walsh, appointed by Moshiri as Everton’s first director of football, finds himself under pressure.

Of those 18 recruits Idrissa Gana Gueye stands out as a successful purchase – plus a rare example of Walsh replicating his scouting of potential bargains at Leicester City – after triggering the £7.1m release clause in his Aston Villa contract. The £30m spent making Jordan Pickford the most expensive British goalkeeper looks a sound investment, even though at 23 he is understandably a work in progress, while Wayne Rooney has contributed with 11 goals and Theo Walcott has made an encouraging start to his post-Arsenal career. That is a positive case presented for four of the 18. It is difficult to go any further.

Everton have international talent throughout the ranks and, thanks to their prodigious academy system, a batch of young players who can benefit from this season’s hard experiences and provide the team with an identity they lack. But in terms of utilising that talent, justifying the investment, style of play and character, the team have consistently earned the damning description at the start of this article. This season commenced with the biggest spending spree in Everton’s history, designed to push the club into European contention for the long term. It has petered out amid acrimony and with the clamour growing for another expensive clear-out.

Moshiri has made only modest change at executive level, appointing Sasha Ryazantsev and Keith Harris to the board, and sacked two struggling managers at significant cost, Roberto Martínez and Ronald Koeman. The decision to dispense with the Dutchman without a replacement in the bag ranks among the more damaging calls.

Appointing Sam Allardyce despite opposition at boardroom and supporter level allayed the threat of relegation at a crucial time with Everton seeking funding for a new stadium. After two wins in 11 matches, disenchantment with Allardyce and his approach has taken root. His talk of improving Everton’s away form before they slipped to a fifth consecutive defeat on the road at Watford on Saturday, and of wanting to be the man who builds the team to play at Bramley Moore in four years’ time, left many fans aghast.

Allardyce is fond of favourable statistics but the Watford defeat left him with an average return of 1.37 points from his 16 matches in charge. Koeman averaged 1.48 points per game and Martínez 1.56 points, although both had more time to construct a team in their image. With that in mind the Everton manager admitted it was “absolutely critical” his first signing was a success. Cenk Tosun, signed for a fee that could rise to £27m from Besiktas, has started two games (being subbed in both) and made two substitute appearances since arriving in early January.

It is the new stadium proposed for the banks of the river Mersey that will define Moshiri’s legacy. The club have agreed a £280m loan from Liverpool council towards the projected £500m costs – “ although the council have not signed off an arrangement that will see them receive £6m-£7m a year in interest repayments – and hope to secure the remaining funds and planning permission this year. Building on Bramley Moore is complex and expensive. Progress has been slow and the stadium constitutes Everton’s strongest grounds for optimism in the two years since Moshiri arrived. He must hope for far greater success on the Liverpool waterfront than he has witnessed so far on the pitch.