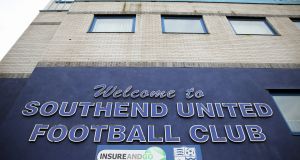 Essex Police are investigating reports of two sexual offences alleged to have taken place on the grounds of current Sky Bet League One club Southend in the 1970s.

A statement from the force said a man in his 50s had contacted them in May 2017 with reports of offences which took place when he was a teenager in 1977 and 1978.

The statement added that a 75-year-old man from Wakefield, West Yorkshire, has been voluntarily interviewed in connection with the investigation.

Essex Police said a second man had come forward in January of this year to say that he had also been the victim of offences when he was a teenager.

Detective Inspector Mel Jobson said: “I am keen to speak to former staff and players who were associated with Southend United Football Club in 1977 and 1978 as they may have information that could assist our investigation.

“I urge anyone who can help or wishes to report any offences to please get in touch.”