Arsenal have fallen out of love with the idea of winning

Has there ever been a cup final where the losers are so unequivocally the story? 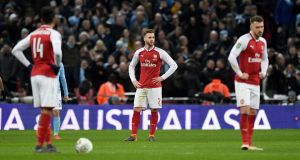 An odd thing happened at Wembley as Manchester City’s players celebrated their EFL Cup final win at the final whistle. Turning away from the gleeful blue hordes in one half of the stadium it took a slight moment of double-take to register that the block of silent red at the other end was not flags or shirts but empty plastic seats.

Basically, the Arsenal fans had gone – a tribute to the efficient exit routes of modern stadium design but also deeply unusual in domestic cup finals, where losing supporters invariably stay to applaud a winning run to this stage.

But then, this is Arsenal 2018, the strangest and most disorientatingly deathly footballing entity English football has produced in the modern age. Arsenal, and what to do about Arsenal: this seems to require some other weapon, a range of emotional response beyond the usual speed-dial of blame the players, get the chequebook out or even the perennial favourite of sacking the manager, which has once again been trotted out as a catch-all dose of medicine.

Not that Arsenal should not sack Arsène Wenger. Probably they should sack him twice to make sure. Or best of all go back in time and sack him two years ago, bring him and sack him again now just to make the point. Arsenal’s manager has clearly run his race at this club. But he is also in his own way simply a component part, a willing bystander to an entropy that exists outside and beyond just a string of managerial wrong turns.

Oh, Arsène. It wasn’t meant to be this way. The worst is not – so long as we can say: “This is the worst.” Of all the Shakespearian characters from which to draw strength Wenger appears these days to be taking his managerial example from King Lear’s Edgar, wandering the storm-wracked heath surrounded by blind and stumbling retainers, consoling himself that so long as he can keep pondering his own misery then his misery hasn’t quite bottomed out yet, that there are other depths still left to plumb.

In reality there are only three questions left in the Wenger endgame. When will this all end? Why, exactly, does it seem quite so howlingly bad? And more ominously: will Wenger’s departure actually change things for the better?

It is the second point here, the degree of agony around an otherwise healthy football club that is the immediate note of interest. Has there ever been a cup final where the losers are so instantly and unequivocally the story? Why are we confronted each week with the spectacle of Arsenal fans writhing and howling and chafing? Why is Gary Neville quite so upset by the sight of talented footballers losing to slightly more talented footballers?

Again, this anguish comes back to that strangeness, the sense of a team and a club who seem complicit in their own defeat, who are suffering above all from an inner shrinking, to have become more machine than man.

Sigmund Freud defined the basis of all horror as an uncertainty as to whether something is alive or dead. And this is surely the fascination with Arsenal, whose players look and act and occasionally even play like elite footballers, a club with a wonderful stadium and a revered manager. But which still seems strangely zombified, lacking some vital element of life, that desperation to succeed and spread joy, the obligation to be brutally in love with the idea of winning.

This is another kind of place now, a club whose players, business model and touchline CEO reflect instead the priorities of the City institutions the Emirates Stadium mimics in its glass and steel architecture; places that are designed to make money while deflecting blame and accountability, where the bottom line is the only line, where short-term economic stability is all. Which is all fine in itself – but it’s not football.

Hence a degree of angst that seems out of kilter with simply losing a cup final or slipping from fourth to sixth. Something is profoundly wrong with this spectacle. Is there a more infuriatingly underexplored high-end midfield talent in Britain than Aaron Ramsey? Granit Xhaka would be an odd presence in any Premier League midfield, a paradox of a player who can look absolutely miles off the pace one moment and only a few miles off the pace the next. What is he doing playing for the seventh richest club in the world?

The sense of disjunct, of a group of players sleepwalking through their own well-remunerated mediocrity, perhaps explains the warmth for Jack Wilshere, who at least looks as though he is offended by the idea of defeat and who chugged about Wembley with spiky energy, bandy legs pounding the grass like an angry centaur.

Otherwise there is just fuzziness, a lack of attention to detail. In the first half at Wembley, Arsenal won a free-kick in a promising area in which two left-footed players, Mesut Özil and Xhaka, hovered over the ball in exactly the same spot, an utterly pointless piece of non-misdirection. Eventually Xhaka, whose left foot is to Özil’s as a rusty hacksaw blade is to a scalpel, clunked the ball out for a goal kick. On the bench nobody even looked cross.

It is a vagueness that seems to have entered the structure of the place, from signings to training, to retention of a coaching team that is quite clearly no longer functioning at the cutting edge.

Last week it emerged that Josh Kroenke – the son of the majority shareholder, Stan – is spending three months in London to “immerse himself in all things Arsenal” and drill down into how the club is run. Yes, the mind does boggle. Kroenke Jr would surely be better served studying someone else, perhaps immersing himself in the way Manchester City have at vast expense bolted on the most successful managerial, recruitment and academy facilities available.

In the meantime, calls for Wenger to step aside will grow ever louder. But this almost feels like a subplot at this stage. Every month Wenger has stayed in the job past the last Champions League season has lessened its appeal to his successors, has made the task of reconstruction more profound. The fan-TV horror, the anguish of Neville may seem comical at times. But there is perhaps something prophetic in these squawkings, harbingers of a collapse that has yet to come, of an oddly creepy hollowing out of the spirit, the extent of which may only become clear in time.