Pair, along with Redstrike CEO Mike Farnan, are hoping for an investment of €40 million 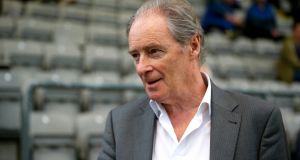 Brian Kerr is among the trio set to meet with government politicians. Photo: Oisin Keniry/Inpho

Niall Quinn, Brian Kerr and Mike Farnan – the Dublin-born CEO of the firm hoping to build a network of football academies around Ireland – will meet with government politicians next week in the hope of advancing Farnan’s proposal. Quinn last week suggested the plan would require an investment of €40 million which he believes can be generated from the corporate sector with the help of tax breaks.

Farnan’s London based firm Redstrike is a key player in the proposal and originally set out with the intention of generating the funding for a national academy along the lines with the ones it has already established in a number of other countries. The former Sky and Manchester United marketing executive who led a bid to buy Leeds United a few years back, says the scale of the plan grew after Quinn and Kerr told him what they believed was really required to the develop more Irish talent.

“Where it’s gone to now is: ‘the problem doesn’t just stop with a national academy, it needs a radical change in the League of Ireland around helping those clubs establish a system that can lead to players going over to England better prepared for top level careers or, if they don’t go, to make the League of Ireland more competitive.”

Quinn outlined much of the plan last week with his comments generating a mixed response. The €40 million price tag he put on providing an academy to every club in what both men suggest would be a slightly reshaped league was widely seen as unrealistic but Farnan insists that idea has also received significant support from the business and sports communities.

“I’m over in the Irish next week when we are due to talk with government officials; we are meeting with other people and, along with Niall, we are putting a committee together that I believe is credible. We’ve got people who have come out of the woodwork who want to work with us.

“Redstrike’s business within the football community is going out and building then running elite football academies. We’ve got a number up and running and we are about to open a number of others this coming year.

“We had intended to look to work with the FAI on one along the same lines in Ireland but Niall’s belief, and now our belief (he says Kerr has also played a major part in shaping the proposal) is that that you have to look at the wider situation with the league. Putting a blueprint in place that clubs can follow in order to develop players who can stay at home until they are that little bit older, so they can complete their education and , we believe, still stand a better chance of becoming Premier League players, is essential.

“Whether the cost of that is €2 million or €1 million or €500,000 (per club) depends on the structure and what exactly you settle on but you certainly do have to spend money on a programme that helps to create a better standard of football and footballer.”

Farnan, it seems, sees some restructuring of the league as desirable and cites the successful transformation of Irish rugby. He insists, however, that these proposals for Irish football are nowhere near as radical and that while there might ideally be some “consolidation” he does not envisage a dramatically slimmed down the league.

The Dubliner, says there have already been “three or four meetings,” with politicians here with north Dublin Fine Gael TD Noel Rock, who has organised next week’s meeting, said to be “very supportive”.

Redstrike’s has operations in Asia, Africa but what might be described as its flagship academy in Hanoi, reportedly developed at a cost of $30 million (€26 million) and part of a wider $100 million (€88 million) plan intended to help the national team qualify for the 2030 World Cup, Farnan says the money there has been generated in much the same way as is proposed for here with Quinn repeatedly advocating tax breaks similar to those previously brought in to benefit the horse racing and film industries. The former Sunderland chairman said last week that the hope is to secure some indication of government support before talking to the FAI.

1 GAA players spend just 2.5 seconds within 2m of each other during play
2 LeBron James among those to slam Drew Brees’ anthem comments
3 How a GAA club sprang up in east Belfast over Sunday breakfast
4 Connacht continue player hunt as six academy graduates promoted
5 Eoin Murchan on being the wrong player in the right place at the right time
Real news has value SUBSCRIBE