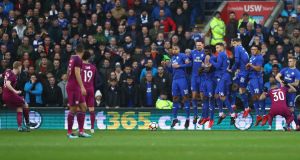 Pep Guardiola saw red. Very deliberately, the Manchester City manager unwrapped the chunky scarf from around his neck and lobbed it back towards the dugout. He had argued long and loudly with the fourth official, Robert Jones, and he had a case.

Bernardo Silva’s shot had fizzed into the roof of the Cardiff net midway through the first half only for the referee, Lee Mason, to rule out what would have been a second City goal for offside against Leroy Sane. The winger may or may not have been in the peripheral vision of the goalkeeper, Neil Etheridge, but the bigger problem for the officials was that TV replays showed Sane had been level with the last defender.

Where was VAR when it was needed? The record home crowd revelled in Guardiola’s fury. Yet it was the lone moment when things did not go according to his script. It was supposed to be a cauldron here, a blood-and-thunder FA Cup tie to evoke memories of 1994, when Cardiff had famously knocked out City. But Guardiola’s team drew the sting from the occasion and they won at a canter.

The result was not in doubt from the eighth minute when Kevin De Bruyne’s low free-kick caught out a jumping Cardiff wall. Raheem Sterling added his 19th goal of the season before the interval and City’s biggest worry came to be whether they would leave south Wales with their limbs intact.

Neil Warnock had promised there would be a “few challenges” from his Cardiff players and there were. The worst one came from Joe Bennett in first-half stoppage time. He jumped in on Sane, after the Germany international had streaked from the edge of one penalty box to the other. Bennett ought to have seen red rather than yellow. The full-back would be sent off in stoppage time for catching the City substitute, Brahim Diaz.

Sane did not reappear for the second half, although a tweet from the Germany national team did. “Hey, Cardiff City,” it read. “Just letting you know, we have a really important tournament in the summer. Please don’t hurt our players. Thanks £InSane.” Guardiola marched onto the field at full-time to make his displeasure known to Mason.

The first tackle of the afternoon had come from Joe Ralls, although the Cardiff midfielder appeared to slip before he caught Ilkay Gündogan on the edge of the area. It led to the opening goal and what a soft concession it was from Cardiff’s point of view.

De Bruyne’s fear factor is such that everybody in the defensive wall expected him to have the technique to pop the free-kick over them and into the near top corner. And so they jumped to prevent him. De Bruyne saw it coming and rolled a daisy-cutter under their boots and into the bottom corner.

Guardiola had omitted David Silva and Sergio Agüero from his starting line-up but it remained an imposing selection and City’s confidence was reflected in the fizz of their passing. Their attack-minded players interchanged positions fluently and, at times, it was remarkable to see how much space they enjoyed in central areas. The home support were noticeably hushed and worried whenever City swept forward. De Bruyne and Sane bristled with menace.

City’s half-time lead might have been greater. Gündogan had worked Etheridge in the early running and there was also the Bernardo Silva disallowed goal controversy. Sterling’s reward came when he bounced a header down and up past Etheridge from Bernardo Silva’s cross while Cardiff’s best moment came on 16 minutes from Callum Paterson when he panicked Claudio Bravo with a 25-yard shot. Bravo almost fluffed it but he was able to clutch the ball on the line.

The gulf in class between the teams was obvious and Cardiff did what they could do bridge it – often through foul means. There were a number of challenges that had Guardiola gesturing in disbelief from his technical area – one of them coming from Bruno Ecuele Manga on Aguero – and his frustration bubbled over at full-time.

Cardiff huffed and puffed in the second half, without truly threatening, and it was Sterling who ought to have added to City’s tally. Twice he ran through but he was unable to finish.