Flynn and Newport preparing for another big payday 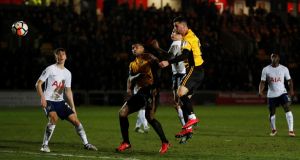 It said plenty for the evening Mike Flynn had just experienced that his biggest concern involved keeping a proud statistic intact.

“I played there in the play-off final for Newport and got us back in the league,” the Newport County manager said of Tottenham’s temporary home at the national stadium, where an FA Cup fourth-round replay now awaits his League Two side. “That’s the only problem – I’ve got a 100 per cent record at Wembley and I don’t want to spoil it.”

The match to which Flynn referred took place on 5 May 2013; he patrolled the midfield as Wrexham were beaten 2-0, ending Newport’s 25-year absence from the Football League.

It has not been an easy ride since but Saturday’s 1-1 draw – which would have been so much more had Harry Kane not scored a barely-deserved late equaliser to cancel out a header from Pádraig Amond – can help permanently change the environment in which Flynn’s team, who came within minutes of a return to non-league last season, operate.

“It allows us to lay foundations for the future,” he said. “I want to improve the training ground – I would like a new pitch, and we need a new building because the old one caught fire [earlier this month]. These kinds of thing are important and I’m sure things will happen.”

Flynn estimated that Newport’s cup run has, to date, earned more than £700,000 for a club whose annual turnover is around £2.2m. He said he “nearly hid under the table” when he saw Tottenham’s starting XI, for which Mauricio Pochettino shuffled his pack but left little to chance with the inclusion of Kane among others, but Newport more than matched their Premier League opponents from start to finish.

“It was scary but I was confident in what my players could do,” he said. “I’m glad they had the big names playing because it makes the result even sweeter.”

Pochettino said his players “missed a massive opportunity to show that we really want to win some trophies” and admitted they were “not motivated to the same level as Newport”.

Other managers might perhaps have sought refuge in the excuse of a patchy, bobbly surface but Flynn clearly appreciated Pochettino’s graciousness and said his players had taken Tottenham to the wire on merit.

“The pitch didn’t stop their passing movement, their style of play and quality,” he said. “The way they handled the football was excellent but I thought we were the better team in the first half. I didn’t want to sit back and just invite pressure. My boys weren’t tired [in the second half], it was that Spurs were relentless. They kept going but my boys were brilliant.”

Sufficiently brilliant to suggest the loss of that Wembley record is no foregone conclusion at all.