David Moyes up and running as West Ham stun Chelsea 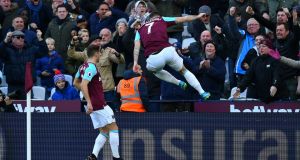 Arnautovic struck after only six minutes to condemn the champions to a first defeat in seven Premier League matches.

The £24million club-record signing was jeered by home fans earlier in the season after some below-par displays, but he looks a player reborn under Moyes.

In fact West Ham look an entirely different side to the shambles they appeared towards the end of Slaven Bilic’s spell in charge.

Moyes showed he is not one to shy away from tough decisions, and dropping England goalkeeper Joe Hart in a World Cup year was certainly a big call.

The Austrian nipped in behind Andreas Christensen and, as Cesar Azpilicueta stood off, curled his shot around the defender and keeper Thibaut Courtois.

Chelsea had plenty of time to respond, yet this was a strangely subdued display from a side with six wins from their last seven outings.

Alvaro Morata, often isolated in attack, cut a frustrated figure and was lucky to escape a booking for a blatant dive as he ran past Winston Reid.

Moyes had said beforehand that he had no one capable of man-marking in-form Eden Hazard, but he gave Pedro Obiang the job anyway.

And the Spaniard stuck to his task so manfully that Hazard will probably still see him in his bathroom mirror when he has a shave in the morning.

West Ham had, of course, led Manchester City at half-time last weekend only to leave the Etihad without a point.

Blues boss Antonio Conte threw on Pedro at the break for the ineffective Tiemoue Bakayoko to give his side more of an attacking edge.

But the anticipated onslaught never came, and it was West Ham who should have scored early in the second half when Antonio played Arnautovic through on goal.

However, this time the former Stoke winger placed his shot too close to Courtois.

The hosts called for a penalty moments later when the ball struck the arm of Christensen, but referee Anthony Taylor shook his head.

Conte had used all three substitutions by the 64th minute, sending on Victor Moses and Willian in a desperate bid to retrieve the situation.

Zappacosta curled a shot narrowly wide from the corner of the area and Adrian dived gratefully on to a deflected effort from Moses.

But when Chelsea’s clearest chance arrived, six minutes from time, Morata snatched at his shot and clipped the sidenetting.

Instead West Ham held out for a first win in eight matches and ensured Chelsea stay 11 points adrift of leaders Manchester City.