Tottenham's Dele Alli says he is his own biggest critic

‘I’m my own biggest critic and know when I struggle’ 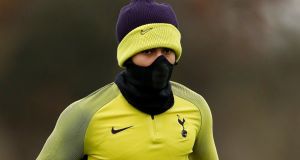 Tottenham’s Dele Alli well wrapped up against the cold at the club’s training centre in London. Photograph: Andrew Boyers/Reuters

Dele Alli has described himself as his own worst critic and suggested he is conscious of his lack of consistency this season.

The Tottenham Hotspur midfielder has hit the heights, notably with his two-goal performance in the 3-1 Champions League win over Real Madrid at Wembley last month, but there have been other occasions when he has laboured.

The 21-year-old intends to use Wednesday night’s final Champions League Group H game against Apoel Nicosia to generate a bit of momentum. It is the theme for Tottenham, as well. Since the victory over Madrid, they have won only one of their five Premier League matches – and that was the streaky 1-0 victory against Crystal Palace. The period has included the 2-1 Champions League success at Borussia Dortmund, though.

Tottenham are certain to finish top of the group and, in that context, it felt slightly surprising to hear Mauricio Pochettino say Alli would start against Apoel.

The manager will rest other leading players, including Hugo Lloris, Eric Dier, Christian Eriksen and Harry Kane but Alli will play because, according to Pochettino, he is fresh, having sat out the first three Champions League games through suspension.

“I’m happy to be getting another Champions League tie because growing up as a kid you want to be playing in the Champions League, so to have to miss the first three games was horrible for me,” said Alli, who served the ban as a result of being sent off when Spurs were eliminated from the Europa League in February.

“I can’t thank the manager enough for putting me back into the team for the first game that I was back [against Madrid at Wembley]. I was happy to repay him with the two goals. Every game is an opportunity to learn and we’re looking forward to Apoel.”

Alli mentioned his learning curve on several occasions but, as significant in the discussion about his form, he brought up how important it was that he continued to have fun on the pitch. Alli thrives when the shackles are off, when he can give free reign to his expression.

“I have learned a lot so far this season and in the two years previously,” Alli said. “I would like to be at my highest level in every single game and every training session but I don’t think that’s possible. I think it’s been a good opportunity for me to learn more about myself as a player and as a person, so I’m looking forward and I’ve got to keep enjoying it.

“Am I self-critical? Very. I am my own biggest critic. I know every time when I’m not playing well and if it’s not going well for me. It’s important that we never set our standards and say we’ve reached our standards. We’ve got to keep improving and getting better every season and in every training session.”

Pochettino has named two academy youngsters in his squad – the midfielder Luke Amos and the striker Kazaiah Sterling – and he is ready to give a first Champions League start to George-Kevin Nkoudou, the winger who has struggled since his transfer from Marseille in the summer of last year.

“I think Nkoudou has started to realise he needs to improve in many things,” Pochettino said. “I wanted to give him the opportunity before but it was impossible. Maybe against Apoel he will have the possibility to play and prove he can help the team and start to grow up.

“There is nothing to complain about his behaviour – he is a lovely kid – but, in professional football, in the last few weeks, he has started to show that he can have the possibility to play and show his quality.”