Ireland certain to face Spain if both qualify for Euro 2020

And in inaugural Nations League, O’Neill’s side may face Wales and Demark again 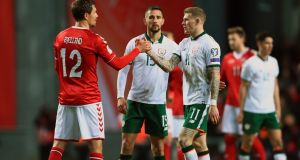 The Republic of Ireland could, it has been confirmed, meet both Wales and Denmark again in next year’s inaugural Nations League, a tournament that Martin O’Neill’s side may well have to prosper in if they are to qualify for Euro 2020, the first major championship that Dublin will play a part in hosting.

The three countries, one of which Ireland beat in the autumn and one of which it did not, will be in different pots for January’s Nations League draw. Northern Ireland and Austria are among the other possible opponents for Martin O’Neill’s men.

Uefa also revealed that the other half of the Euro 2020 finals group to be played at the Aviva will be staged in Bilbao. With each host nation that qualifies for the tournament guaranteed two home games in the group stages, the decision means that Ireland will be in the same group as Spain should the two countries make it safely through. The question of which team would get to host the game against the other would only be decided when the draw for the finals takes place in December 2019.

Qualifying for the event is more complicated than usual because of the introduction of the Nations League, although the usual process of group stages will actually be more straightforward, with just the top two in each mini-league progressing.

The four spots at the finals that would previously have gone to play-off winners, one of which Ireland secured for Euro 2016, will now go to section (or league) winners from the Nations League, the initial stages of which will be played next autumn. Each section will lead to semi-finals and finals, with the eventual winners going through to the European Championships. Where teams have already qualified through the traditional route, however, their places in these knockout stages will be passed down to the next-highest-ranked side in their league that has not yet qualified and, if needs be, to teams from lower-ranked leagues.

Ireland have been placed among the second seeds in league two with Austria, Wales, Russia and Slovakia in pot one and Northern Ireland, Denmark, the Czech Republic and Turkey in pot three. The draw takes place in Lausanne on January 24th. The groups for the traditional qualifying process will be drawn in Dublin on December 2nd next year.

The news that Dublin has been paired with Bilbao for the finals has, meanwhile, been widely welcomed, with FAI and government officials seeing it as a positive outcome of a process that involved the various host nations being partnered up on the basis of “sporting strength and geographical considerations”. The sporting strength aspect involved a fairly straightforward seeding of the teams based on the Uefa rankings; the “geographical considerations” end of things was rather more imprecise – with Rome and Baku, for instance, more than 3,000km apart, although clearly the Azerbaijani capital’s partner city was never going to be close by.

Travel between the Irish capital and the Basque city on the northern coast of Spain should be rather more straightforward, with the small number of direct flights that currently exist likely to be added to extensively during the tournament. Bilbao’s stadium, the San Mamés, home to Athletic, was completed in 2013 and holds 53,000, fractionally more than the Aviva.

The total number of cities involved in staging the event was, meanwhile, cut by one, as Brussels had its four games pulled on the basis that it could not provide the guarantees required by Uefa that the new stadium it had committed ahead of the event would be constructed by the 2019 deadline set.

Cardiff and Stockholm had both hoped to profit from Brussels’ difficulties, as the two cities, which had each sought to stage games in the original process, bid to take on the four games that were suddenly up for grabs, but Uefa have gone for the even safer and more lucrative option of handing the matches to Wembley, which will now stage seven of the tournament’s 51 games, three group games, a second round match plus both semi-finals and the final.

England all in a spin once again as India seal the series 11:00
The story behind the amazing growth of women’s Gaelic football 10:12
Kilmacud Crokes and a 25-year boom in women’s football 10:00
Ulster’s new breed of backline boys can return silverware to Belfast 06:00
Gordon Elliott has ‘no complaints’ following one-year ban 09:13