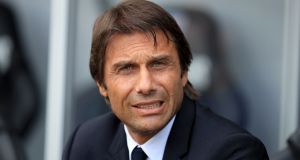 Antonio Conte: “We are building to try and create a good foundation to support [us] not only for the next season, but for many years.” Photograph: Mike Egerton/PA Wire

Antonio Conte has offered context to Chelsea’s imminent title success by claiming that their nearest challengers, Tottenham Hotspur, are “more advanced” in their development and would have won the Premier League at a canter if his own players had not produced a remarkable campaign under his management.

The leaders, now four points clear with a game in hand, can claim the championship over the next five days by defeating Middlesbrough and then West Bromwich Albion after Spurs’ pursuit finally stumbled at West Ham United on Friday.

It would be the fifth domestic title secured under Roman Abramovich’s ownership, and arguably one of the most impressive given the team’s spluttering mid-table finish last season.

Conte pointed to those toils, endured under the stewardship of José Mourinho and Guus Hiddink, as evidence that Chelsea had initially appeared unlikely title challengers.

“I think if you compare Tottenham Hotspur with Chelsea, they had an advantage this season,” the Italian said. “Mauricio Pochettino is a really good manager and is working with his team for a third year. Last season, they fought to win the title and Chelsea arrived 10th. You can see our transfer market, and Tottenham’s transfer market. So I think Tottenham, in their project, have an advantage if you compare them to us.

“This is my first season and I found a lot of situations, a lot of players. Pochettino has been working there for three years and has changed a lot of players, and is working very well. For me Tottenham are a really strong team and it’s normal to see them fighting for the title.

“In this season, if Chelsea had not performed in this way, Tottenham would have won the title without difficulty. Only this great season [from us] is pushing them to fight and, maybe, to win or not to win the title. But, I repeat, Tottenham’s position for me is more advanced if you compare Tottenham’s to Chelsea.”

That represents a shift in Conte’s outlook given that only a month ago he had argued expectation comes with the territory at Stamford Bridge, where winning is considered “normal” while losing is “not a disaster” at Spurs.

With his team now on the verge of the title, he dismissed the suggestion that without European football they had benefited from a far less onerous schedule than that of Pochettino’s side.

“Don’t forget that Tottenham dropped at the first group stage, and then dropped in the first game in the Europa League [against Gent],” he said. “If you consider our games and their games, there is a difference of what, eight games?

“But if you consider the squads, the numbers in each squad, you can see the difference: one team prepared to play the Champions League with 25 or 26 players, and another prepared to play only the league, the FA Cup and the League Cup. My expectation was a great challenge in this league against Manchester City, Manchester United, Tottenham, Arsenal and Liverpool. Next season for us it will be the same. But we have one year to work and then the possibility to go into the market and choose the right players on my idea of football.”

Conte, who will make a final decision on the involvement of David Luiz and N’Golo Kanté against Middlesbrough tonight, expects a busy summer of squad reshaping at Stamford Bridge.

Diego Costa is likely to move to Tianjin Quanjian – unless a major European club expresses late interest – while John Terry will sever his ties with the club.

There are sure to be a number of high-profile arrivals, too, with the club’s wishlist including Everton’s Romelu Lukaku, Alexis Sánchez of Arsenal, Tiemoué Bakayoko of Monaco and Southampton’s Virgil van Dijk.

The prospect of Conte adding an entirely new spine to the side is very real.

“We are building,” he added. “If we are able to win, it’s a great achievement. When you start to build, it’s very difficult to carry on winning. This is a process. No one thought Chelsea could fight to win the title and be in the FA Cup final this season.

“For sure, we are in a moment of transition. We are losing a lot of top players who have written the story, the history, of this club. This season we lost Branislav Ivanovic, we lost Mikel John Obi and next season we’ll have lost John [Terry]: three big players. Don’t forget Oscar, who went in the transfer market when we sold him.