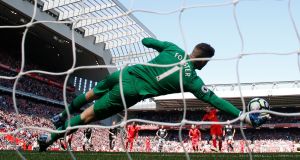 Liverpool reclaimed third place in the Premier League but there was no cause for celebration on the final whistle at Anfield. James Milner sank to his haunches as he reflected on a potentially costly penalty miss while Jürgen Klopp offered consoling pats on the back to his players. The Champions League remains in sight, but Liverpool are scrambling towards the line.

Southampton emerged unscathed from a confrontation with Klopp’s team for the fourth time this season thanks to a composed defensive display and valuable contributions from Fraser Forster. The England goalkeeper produced a fine save to deny Milner from the penalty spot in the second half but, in truth, victory would have flattered a laboured Liverpool performance. Two points from the last nine available at Anfield has ensured their pursuit of a top four finish will not be a comfortable ride.

The game came to life only marginally after a sterile first half. Referee Robert Madley angered the home crowd when he penalised Lucas Leiva for a foul on Dusan Tadic, refused to book Manolo Gabbiadini and let play continue when Nathaniel Clyne was pulled to the ground. And that really was the sum total of incident before the interval. Nothing else roused Anfield as Liverpool, not for the first time this season, found Southampton a disciplined, organised and composed obstacle to their ambitions.

Puel’s team showed only limited intent as an attacking force and spent most of a sun-kissed afternoon on Merseyside sitting deep and absorbing pressure. They did so comfortably thanks in large measure to a central midfield trio of Steven Davis, Oriol Romeu and James Ward-Prowse. Southampton’s midfield core stuck diligently to the task of protecting their backline while tracking Liverpool’s runs from deep, and the home side lacked the ideas and movement to find a route through to Forster’s goal.

When they did escape the trio’s shackles, and Roberto Firmino was the only forward able to do so before the introduction of Daniel Sturridge, Liverpool’s attempts on goal were straight at the Southampton keeper. With even Philippe Coutinho’s touch deserting him on occasions, the contest developed into another fierce examination of Anfield’s patience.

Klopp’s team were handed a glorious opportunity to end the stalemate and enhance their Champions League prospects midway through the second half by Jack Stephens. The Southampton defender has flourished in the absence of the injured Virgil van Dijk and was in the midst of another assured display here when he conceded a needless penalty. Stephens beat Divock Origi in the air as they challenged for a Lucas cross into the area but, as they jostled for the second ball with Emre Can and Maya Yoshida in attendance, the defender nudged the ball clear with his elbow.

Madley had no hesitation in pointing to the spot. Southampton argued long and hard over the correct decision with Forster doing his utmost to unsettle Milner as he prepared to take the kick. He succeeded. The left-back struck his penalty hard and low but the England international goalkeeper read his intentions perfectly and produced a fine save to his right. Milner’s first penalty miss of the season could not have arrived at a worse time for Liverpool.

Klopp went for broke almost immediately, introducing Adam Lallana and Sturridge for Lucas and Origi respectively. Their quality lifted Liverpool’s performance and threat level but Forster was equal to anything that came his way. One save from Coutinho was a matter of routine, so too a tame effort from Sturridge after the striker had created space for himself superbly inside the area, but in stoppage time he made an excellent stop to tip over substitute Marko Grujic’s header from Milner’s cross.