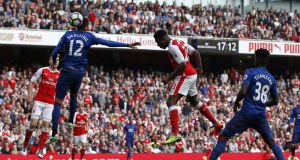 For Granit Xhaka, the pain was excruciating. It came after a bang to a nerve in the back of his lower leg at Tottenham Hotspur last Sunday, only 20 minutes into the derby, and he feared that he would have to come off.

The Arsenal midfielder gritted his teeth and battled on but, when he eventually succumbed in the 65th minute, his team were 2-0 down and the game was over.

What a difference a week makes. Xhaka felt the same injury here and he was removed from the fray in the 76th minute. This time Arsenal were 2-0 up and he departed to a great ovation. Xhaka had turned his game in his team’s favour with a deflected pot-shot and nobody could say that it was not an overdue break for him – or his club.

There had been little on when Xhaka looked up at goal, 25 yards out, early in the second half and with this contest rather meandering. And so he shot.

It hit Ander Herrera, looped up and dropped down under David de Gea’s crossbar. Arsenal were up and running and, when Danny Welbeck headed home moments later, his former club were asked to respond.

They had nothing and, at last, Arsène Wenger could celebrate victory in a competitive game over a José Mourinho team at the 16th time of asking.

Arsenal live to fight another day in their quest for a top-four finish. As for United, this was the limpest of defeats and it stopped their unbeaten run in the Premier League at 25 matches. Opportunity had knocked loudly for them after Liverpool’s home draw against Southampton earlier in the day. They had regain control of their destiny in the fight for a Champions League place via the league.

They surrendered it and a single statistic continues to damn them. They have failed to score a single goal away from home against a top-six club this season. They retain a shot at next season’s Champions League via the Europa League, where they are 1-0 up against Celta Vigo in the semi-final.

Win that competition and the season looks like a success. But it is plain that Mourinho has so much work to do.

His starting line-up was strong, despite the eight changes that he made from last Thursday’s first leg in Vigo, and it is worth noting that he was without only five players because of injury – Marcos Rojo, Luke

If they were not quite “injury-ravaged” – to borrow the term that has clung to them – Mourinho’s squad were battle-weary, having played three times every week since the beginning of April. It was time for them to dig deep and the Liverpool result had to have pepped them.

Ditto Arsenal who, as usual, had to beat not only what was in front of them but their own psychological demons. Their record against the top clubs in the division has been poor this season and they knew that they had to give a response to the derby defeat at Tottenham.

It was a slow-burner and it was impossible to escape the feeling that this fixture is not what it used to be, even if there was some Mourinho-inspired narkiness midway through the first half.

Alex Oxlade-Chamberlain had bombed away up the right, eluding Wayne Rooney’s rather crude slide challenge and he managed to win a corner. Wenger was unhappy at the Rooney hack and he told the fourth official, which prompted Mourinho to move across to the edge of his technical area.

He shouted the odds with Wenger and the fourth official and, briefly, the home crowd stirred.

It was neat and tidy enough in the first half, without there being any particular bite or penetration. Arsenal pressed on to the front foot, with United happy to try to punch on the counter, where they had the pace of Anthony Martial at centre-forward.

Martial had a clear chance early on, after Rooney had played him in, only for Petr Cech to block at the near post while Rooney also worked the Arsenal goalkeeper at close quarters on 33 minutes. The chance followed Rob Holding’s dreadful back-pass from wide on the right, which offered a reminder of Arsenal’s defensive vulnerabilities. Holding had come into Wenger’s back three for Gabriel Paulista, who had made mistakes at Tottenham.

Arsenal had opportunities of their own in the first half, and none better than when Aaron Ramsey surged onto Alexis Sánchez’s low through-ball in the 10th minute. He took on the shot first time and De Gea tipped it smartly past the far post. Danny Welbeck was denied by a desperate Phil Jones block following a corner and Oxlade-Chamberlain extended De Gea with a deflected blast from outside the area.

The game turned on Xhaka’s goal and he will argue that he made his own luck. Confidence boosted, Arsenal duly took complete control. Mourinho would not have enjoyed seeing Martial robbed by Holding, as he sought to provide an outlet for United and, when the ball was worked to Oxlade-Chamberlain on the right, he slung over a cross. Welbeck had got in behind Chris Smalling and, when he rose, he was never going to miss.

Rooney had a few efforts towards the end but United could have played on and on and not scored. The closing stages were significant for Mourinho’s granting of a debut to Scott McTominay. As with everything he does, it felt like he wanted to make a point – this one about how stretched his resources are. Like this performance, it was not convincing.