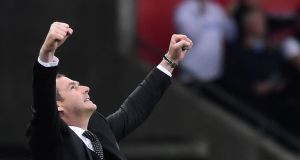 Swansea City have achieved “something special” in climbing out of the Premier League’s relegation zone but, with the end of the season in sight, the battle to maintain their top-flight status is still in the balance, manager Paul Clement said.

After Hull City lost at home to Sunderland on Saturday, Swansea capitalised to climb above them with a tense 1-0 victory over Everton.

Fernando Llorente headed the hosts in front midway through the first half but, with broadcasters showing Swansea supporters biting their fingernails and holding their heads in their hands, Everton laid siege to their goal in the closing stages.

The Welsh side hung on to climb out of the drop zone having claimed seven points from three games.

“It is one of my proudest moments today. What a fantastic, gritty performance. It was so important we got that result today after what happened at Hull,” Clement told BT Sport.

“We have hit some form both offensively and especially defensively. We have played against really good opposition and seven points from three games is a fantastic tally.

“It gave us a lift before the game knowing that [Hull’s] result had gone in our favour; we knew if we did something special we could get out of the relegation zone.”

With games remaining against relegated Sunderland and West Bromwich Albion, Swansea appear to have a kinder run-in than Hull, who face Crystal Palace and Tottenham Hotspur.

“We are confident we can go anywhere and get a result with the form we’re in. We’re focused on Sunderland on Saturday,” Clement told the BBC.

“It’s not done. It just shows what happened this weekend, the swing can go with you one week and then go against you. We’ve got to try and pick up all three points.”

Swansea were led by the superb Alfie Mawson who kept the Premier League’s most lethal marksman, Romelu Lukaku, quiet all game and calmly marshalled their defence throughout.

“We knew what we had to do, go out there and hope we can get a result regardless of Hull’s,” the impressive 23-year-old told the BBC.

“We were thinking ‘please hold on’ and Sunderland did us a favour but we have to go there next week. The atmosphere was fantastic. That’s why we’re paying for 3,000 [fans] to come up next week. Through the trenches, they’ve been with us.”