Round-up: There were draws for Bournemouth and Burnley while Leicester won 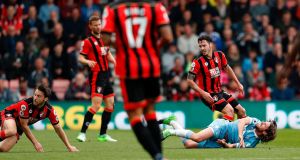 Arter was lucky to avoid a red card after his tackle on Joe Allen. Photo: Adrian Dennis/Getty Images

Ryan Shawcross’ controversial own goal denied Stoke a first away win since January as Bournemouth scrambled a 2-2 Premier League draw.

Defender Shawcross unwittingly deflected Josh King’s strike into his own net but Stoke were left frustrated that the Bournemouth striker was not ruled offside.

Stoke insisted King was offside from Max Gradel’s headed assist, but the goal stood and the visitors were forced to settle for just their second point on the road since their 3-1 league win at Sunderland on January 14.

Stoke finally ended their 10-hour away-goal drought, thanks to Lys Mousset’s own goal and an ungainly finish from Mame Biram Diouf.

Bournemouth hit back through Junior Stanislas and later Shawcross’ own goal however, to ensure the two mid-table sides shared the spoils.

Stoke’s away goal drought finally ended on 629 minutes, but when that first strike came, it was not courtesy of any of their own players.

Instead Bournemouth forward Mousset put through his own net after Marko Arnautovic’s corner, unwittingly back-heading past Artur Boruc.

The Cherries were frustrated to turn around in arrears, especially after Adam Smith had struck the post with a fine early effort.

The full-back blasted against the woodwork from almost 18 yards after a fine reverse flick from Stanislas in the move of the half.

How has Harry Arter stayed on the field after that?!??! #BOUSTK pic.twitter.com/DKDYHHGNq5

Harry Arter was fortunate to escape a red card for a two-footed lunge on Joe Allen, with the fact he took the ball perhaps just enough to keep him on the field.

Arnautovic underscored Stoke’s tribulations in front of goal by heading over from just four yards when totally unmarked, from Allen’s neat cross.

But just as the Cherries started dreaming of victory, up popped Diouf with a finish as ugly as it was welcome to the visitors.

Arnautovic unsettled Francis when challenging for Geoff Cameron’s cross, allowing Diouf to latch on to the loose ball for his first league goal since May.

The Senegal striker eventually hooked the ball home, but not before several bobbles in a slow-motion finish to leave Cherries keeper Boruc kicking himself.

The game’s second own goal then had the hosts level again, with Shawcross powerless to stop himself deflecting King’s effort past Jack Butland.

Full-back Smith again played a pivotal role, his cross allowing Gradel to head into King’s path — though the Norway striker appeared to stray offside, leaving Stoke frustrated for the goal to stand.

Leicester cruised to a comfortable 3-0 victory over Watford to seal Premier League safety.

The Foxes secured a fifth-straight home win in the top flight to climb into the division’s top 10 after goals from Wilfred Ndidi, Riyad Mahrez and Marc Albrighton.

It was also boss Craig Shakespeare’s eighth win in 13 games in charge and only Tottenham (24) have earned more points than Leicester’s 22 since Shakespeare took over in February.

The outgoing champions, who also hit the woodwork twice, moved up to ninth as Watford dropped to 15th following a fifth successive away defeat without scoring.

The pair are virtually safe but the Hornets’ end-of-season form will be a concern as they slipped to a seventh defeat in their last 11 outings.

Sam Vokes’ second-half brace denied West Brom a first away victory of 2017 and earned Burnley a 2-2 draw that edged them closer to confirming their Premier League survival.

After a forgettable first half, Vokes’ 56th-minute opener ignited proceedings at Turf Moor, with the Baggies scoring twice in 12 minutes through Salomon Rondon and Craig Dawson having previously gone nearly nine hours without a goal.

Yet a first victory on their travels since New Year’s Eve would elude them as Vokes capitalised on Ben Foster’s poor decision to come for a free-kick to level with four minutes remaining, taking the Clarets to 40 points, which will be enough to secure survival if Swansea fail to beat Everton.