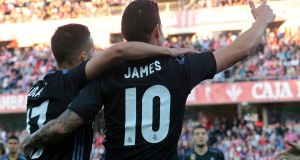 Real Madrid swept past relegated Granada 4-0 with a clinical first-half display at Los Carmenes to move back level with LaLiga title rivals Barcelona.

Barcelona’s 4-1 victory over Villarreal earlier on Saturday had left Real, who still have a game in hand, little margin for error.

Despite head coach Zinedine Zidane opted to make nine changes, Los Blancos delivered the required performance as James Rodriguez and Alvaro Morata both scored twice in what was a devastating opening 35 minutes.

Although Tony Adams’ side regrouped for the second half, the damage was already done and Real head into Wednesday’s Champions League semi-final second leg with city rivals Atletico on the back of another impressive display.

Only captain Sergio Ramos and midfielder Casemiro retained their place in the starting XI from the side which won the first leg 3-0 at the Bernabeu on Tuesday night.

Karim Benzema, Marcelo, Luka Modric, Isco and Toni Kroos were all kept on the bench while hat-trick man Cristiano Ronaldo was rested.

There was little to worry the visitors, who swept into the lead after just three minutes when Rodriguez converted a cross from Lucas Vazquez.

The Colombian was soon on target again when he made the most of some more slack marking to head in a deep cross from the left by defender Fabio Coentrao after 10 minutes.

Adams had seen enough and made a switch when he replaced Aly Malle with Uche Agbo, both players on loan at Granada from English side Watford.

It made little difference, however, as the one-way traffic continued before Real added a third on the half-hour mark.

Danilo got away down the right before pulling the ball back into the Granada penalty area, where Morata arrived on queue to crash his shot in off the crossbar past goalkeeper Guillermo Ochoa.

Morata swiftly added his second just four minutes later, after the forward held off his marker on the left of the penalty area and then drilled the ball into the top corner.

Vazquez saw his effort come back off the crossbar before Casemiro then sent a close-range effort over an open goal after the forward had a shot blocked when played in by Mateo Kovacic.

With the match already over as a contest, it was no surprise to see Real’s tempo drop for the second half.

Just after the hour, Danilo’s low shot hit the outside of the post following a determined run by substitute Benzema before Ramos headed straight at the Mexican keeper when he met a corner.

Ochoa then made a fine stop to save from Vazquez as the ball looked set for the bottom corner, with Ramos then again off target from close range.

Granada were at least now somewhat improved as a unit and created an opening at the other end when Gaston Silva tested Real keeper Kiko Casilla.

Striker Adrian Ramos almost gave the hosts a late consolation, but his effort was deflected just off target.

Real remain second, level on points with Barcelona, but crucially having played a match less.

1 Tianna Bartoletta: ‘After you’ve gotten your medal, you become black in America again’
2 Ian O’Riordan: An education in race and running during college days in America
3 Sports bodies must keep electronic records of participants as training sessions resume
4 Betting shops face uncertain future as they prepare for Monday reopening
5 Timo Werner giving up on Liverpool dream on path to being truly wanted
Real news has value SUBSCRIBE
Crossword Get access to over 6,000 interactive crosswords