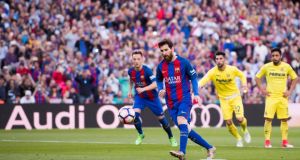 Barcelona briefly opened up a three-point lead at the top of LaLiga with a 4-1 victory over Villarreal at the Nou Camp.

However, Real Madrid’s easy 4-0 win over Granada cut the gap with Barca still top on head-to-head record, but Real have a game in hand.

Neymar put Barca in front after 21 minutes but Villarreal equalised through Cedric Bakambu. Lionel Messi’s strike regained the lead before Luis Suarez made it 3-1.

Messi’s Panenka penalty at the death would seal all three points.

Andres Iniesta returned to the starting line-up after recovering from a groin injury with Andre Gomes the man to make way, while Lucas Digne came in for Jordi Alba.

The Catalan club were looking to put the pressure on Real Madrid but faced a stiff task against a Villarreal side who were hoping to keep their European ambitions alive following three successive league victories.

Villarreal, who had only conceded 10 times on the road prior to this fixture, proved to be a tough nut to crack in the early stages.

Messi was presented with Barca’s first real sight of goal after 20 minutes when Alvaro Gonzalez handled at the edge of the box, but the Argentinian blazed his free-kick over the bar.

The hosts finally broke Villarreal’s resistance moments later. Messi found space inside the box and fired across a sea of defenders and picked out Neymar, who took a touch before slotting past Andres Fernandez. Replays suggested that the Brazilian looked to be in an offside position.

Miscommunication between goalkeeper Marc-Andre ter Stegen and Gerard Pique almost saw the visitors gifted an equaliser as the defender deflected a cross onto the crossbar.

Fran Escriba’s side responded after 31 minutes as Bakambu raced onto Roberto Soldado’s through ball before keeping his composure to fire past Ter Stegen and score his seventh goal in six games.

Pique could only glance his header wide after Messi’s cross while Soldado should have given Villarreal the lead with the goal at his mercy as both sides looked to gain a stronghold before the break.

But on the stroke of half-time, a moment of brilliance from Messi saw the hosts regain the lead. The Barca talisman skipped past the challenge of Rodri before slotting the ball into the bottom corner from outside the box, with a slight deflection leaving Fernandez wrong-footed in the Villarreal goal.

Barce continued on the front foot as Iniesta’s sublime pass found the run of Digne but the defender lashed over the bar.

As the visitors looked to attack, a ruthless break saw the Catalans take a 3-1 lead. Sergi Roberto played through Suarez who created space before blasting past Fernandez and putting the game out of reach.

Jaume Costa’s handball in the box gave Messi the chance to make it 51 goals this season and the Argentinian obliged with a Panenka nine minutes from time to extend their advantage in the tite race.

1 Tianna Bartoletta: ‘After you’ve gotten your medal, you become black in America again’
2 Ian O’Riordan: An education in race and running during college days in America
3 Betting shops face uncertain future as they prepare for Monday reopening
4 The Irish Times shutdown sports quiz: Part three
5 Timo Werner giving up on Liverpool dream on path to being truly wanted
Real news has value SUBSCRIBE
Crossword Get access to over 6,000 interactive crosswords