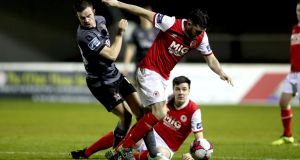 At this stage last year St Patrick’s Athletic had a single point to show for their first five league games and as if having six coming into this wasn’t enough sign of progress this time around, their clean sheet here earned number seven against a side that had scored 11 times against them without reply in three encounters over the course of 2017.

Liam Buckley, to be fair, rarely gave the impression the pressure was getting to him in the tough times last year but he must be sleeping even more soundly just now.

Whether his side are on course for anything much more than a less nail-biting end to the current campaign is another thing but the improvement was again clear in this game.

The Dubliners contained their opponents fairly effectively through the opening half then carved out a chance of two to snatch the win as the game opened up in the second.

Clear-cut chances
Dundalk may wonder quite how they didn’t make their superiority tell, but while they had struggled to convert a string of clear-cut chances on Friday night, here they found it hard, even through their best spells, to open up a well organised defence that worked hard to hold their own.

The visitors had the edge for the most part, especially in the first half, but there was nothing like the intensity here that they had brought to the game against Cork on Friday night.

From the sideline, Stephen Kenny did his best to generate something approaching it, urging his defenders to get the team moving forward but for the most part the Kevin Toner and Lee Desmond got off lightly enough, while behind them Barry Murphy scarcely had a save to make through the opening half-an-hour after having stopped from Pat Hoban just 10 minutes in. Towards the end of the half, Dundalk did briefly seem to be finding their feet and it took two goal-line clearances to keep the home side on level terms.

Darragh Markey, booked moments early for a wild challenge on Sean Hoare, was in the right place at the right time to stop Daniel Cleary’s header creeping in at the foot of the left post but he kept his cool impressively to get the ball away.

Toner’s stop a minute or so later was more spectacular with Ronan Murray’s shot on the turn looking to be well on its way to the top corner before the centre back somehow headed it away for another corner.

Up until then, the hosts seemed happy to defend with a lot of determination and wait for the occasional opportunity to strike on the break but they began to show a little more ambition after the break. That, in turn, meant a little more space for Dundalk to run into, especially down their left where Simon Madden was looking to getting forward and Murphy had to be brave to save at Murray’s feet after Michael Duffy and Ryan Connolly had linked up especially well early on.

The former Galway United man then clattered the bar with a free. Both managers might well have hoped for better but Buckley will have been much the happier of the pair.