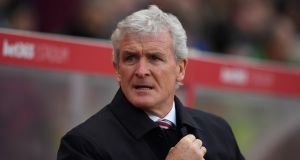 Mark Hughes is the leading candidate to succeed Mauricio Pellegrino as the Southampton manager. The club dismissed Pellegrino on Monday after a dire run of results that has left them one point above the Premier League’s relegation zone.

The Southampton vice-chairman, Les Reed, would have preferred to wait until the end of the season before making a change but the 3-0 defeat at Newcastle on Saturday represented the tipping point, particularly as Pellegrino later questioned whether the players were giving their all.

Reed and his director of football operations, Ross Wilson, always have contingencies in place for the departure of staff and it is likely they would have sounded out Hughes over recent weeks.

Hughes was sacked by Stoke in January with the team in the Premier League’s relegation places. He spent 4½ seasons at the club during which time he delivered three ninth-placed finishes and one season in 13th place.

The 54-year-old’s extensive experience in the Premier League is attractive to Southampton, whose need for an upturn in results is urgent. Only three of their remaining eight league games are at home – and two of those are against Chelsea and Manchester City. Hughes is sixth on the Premier League list for matches managed behind Arsène Wenger, Sir Alex Ferguson, Harry Redknapp, David Moyes and Sam Allardyce.

Hughes began his managerial career with his native Wales and he has also taken charge of Blackburn, Manchester City, Fulham and Queens Park Rangers. His status from his playing days is a further string to his bow – as is his availability – and it would be hoped he could provide an immediate bounce. Hughes played for Southampton for almost two seasons towards the end of his career.

Pellegrino had won only once in 17 league games and his chopping and changing of the team did not lead to him finding the right blend. He was criticised for playing off the back foot and for the lack of goals. He did, however, drive the club to the quarter-finals of the FA Cup, where they face a trip to Wigan on Sunday.

Pellegrino said: “The manager is the face of a lot of decisions and actions but I always tried to put the club first with my technical staff and the board behind me. I feel so sorry to leave the club in this situation but when you don’t get results I understand the decision the club has to take.”