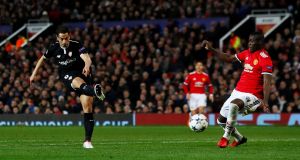 This elimination of Manchester United from the Champions League at Old Trafford on Tuesday night was deserved. José Mourinho’s team barely raised a whimper against Sevilla who finally took their chances through Wissam Ben Yedder.

The No 9 had only just been introduced yet the space he luxuriated in for his opener meant the forward could hardly fail to score from Pablo Sarabia’s pass. His second was as scruffy as United were slipshod as he beat Ashley Young to a header that went in off the bar despite David de Gea’s efforts.

Romelu Lukaku grabbed one back minutes from time but this dismal defeat that had Old Trafford emptying before the final whistle means United can only realistically now claim the FA Cup.

Mourinho made two changes from Saturday’s win against Liverpool, replacing Scott McTominay with Marouane Fellaini and Juan Mata with Jesse Lingard. Following a thigh injury that ruled Paul Pogba out of the game at Old Trafford he was on the bench here and whether he was fit to start was moot. Whether his absence would prove a telling blow was about to unfold.

Vincenzo Montella changed two players, too. The cup-tied Miguel Layun plus Nolito, who was a reserve, were excluded for Simon Kjaer and Joaquin Correa.

United’s quest to reach a first Champions League quarter-final since David Moyes was manager began in a wall of noise created by the travelling support. It also had Lukaku execute a neat one-two with Lingard though his right-foot shot did not trouble Sergio Rico, Sevilla’s goalkeeper. United’s next foray came via Ashley Young, Fellaini, and Alexis Sánchez as the ball was moved slickly between them. When the Chilean, again operating at No 10, found Marcus Rashford, Sánchez screamed for a return but the 20-year-old saw his attempt blocked.

United’s tempo was good though it suited their opponent, too. After pressing Mourinho’s men, Éver Banega delivered a first corner for Correa to glance a header that just cleared De Gea’s bar.

There was uncertainty when Antonio Valencia hesitated, mishit a punt out of his area and Franco Vázquez blasted wide. More trouble ensued later after Eric Bailly handed the ball to Vázquez. Quickly, Luis Muriel was pulling the trigger and United were relieved when he proved off target.

Already this had the feel of a long night for Mourinho’s team. An inability to slow the contest down and retain possession was the issue. An illustration came when Young hit a hopeful 40-yard pass to Lukaku that went to Clement Lenglet when a short ball was required. The contest was bypassing United’s midfield in the hope that Fellaini or Lukaku could make something happen from a Hail Mary dropping on them from the Manchester sky.

Any trickery was produced by the Spanish side. Rashford became the latest to cede the ball cheaply and suddenly United were turned and Muriel was beating De Gea with a left-foot shot that rolled wide of the left post.

When Rashford did find subtlety with a chip into the onrushing Lukaku, the No 9’s touch was non-existent.

This showed how uneven United were. Rashford burst down the right and into a tackle. Lingard picked out Fellaini and his header went awry. As the first half neared the break it had been akin to a rough and tumble Championship affair of little rhythm.

United had, indeed, missed Pogba and the question was whether he would be introduced at some point to try and turn the tie.

Fellaini, a potential candidate to be taken off for the Frenchman, drilled a left-foot effort that warmed Rico’s fingers: this was about as good as United’s first half got.

The truth was that if Sevilla had taken their chances United would have been in strife as the second half kicked off. As it was they stared down the barrel due to the away goal situation, knowing if Montella’s team registered they would need two, which United had not managed against Spanish opposition since 2003, home or away in the competition.

Correa gave them a scare when he was found in space before De Gea. As the No 11 went to shoot Bailly swooped and made a crucial tackle, ending the danger.

United showed no sign of being more composed after Mourinho’s interval talk. Lingard did manage a shot on target, which Rico turned away for a corner. From this Rashford eventually whacked the ball across goal and found no one. Now came a rare flash of Sánchez brilliance as he skipped away from three black shirts and curved the ball to Rashford but he could only smack the ball into the stands. Mourinho had seen enough and on the hour introduced Pogba for Fellaini.

Disaster was about to strike via Ben Yedder. After the opener Mourinho threw on Juan Mata for Valencia and Anthony Martial for Lingard but Ben Yedder headed a second and United were heading out. For Mourinho, the inquisition now begins. – Guardian service