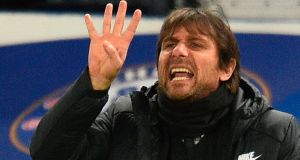 Chelsea’s Italian coach Antonio Conte: “We have to make a great game if we want to have a chance to go into the next round.” Photograph: Getty Images

Antonio Conte may just have been being painfully realistic but his body language at Camp Nou came across as distinctly downbeat. The Chelsea manager’s message was laced with caution on the eve of their return match with La Liga’s champions elect.

He talked up Barcelona’s Andrés Iniesta as a “genius with a football”, reminding all that it would take “a perfect game” to knock out “one of the best teams in the world” and warning his own that they must be “prepared to suffer”. The latter phrase has become his motto over recent weeks and it is anything but sabre-rattling. His team appear to have come to Catalonia braced to weather a storm.

Yet, behind the scenes there has been an acknowledgment that Chelsea must gamble if they are to make the Champions League quarter-finals. Their approach in the second leg with the score at 1-1 is likely to be bolder than Conte’s rhetoric suggested. In the first leg he had asked Eden Hazard to fill in as a false number nine and asked Willian and Pedro, a former Barça player, to scurry to the Belgian’s support. Chelsea had soaked up the visitors’ possession and prospered on the counterattack.

Hazard may not have been entirely chuffed at the amount of desperate passes flung at his forehead but Chelsea had struck both posts and led for 13 tantalising minutes just after the hour-mark. Had it not been for Andreas Christensen’s rush of blood, their tactics might have secured an advantage to which to cling.

Barcelona are a different proposition at home. But this time, and having rather surprisingly suggested he would consult his squad in the buildup – he had vowed against repeating that after watching a defence rejigged at the players’ request ripped to shreds at Roma in October – Conte’s plan is set to be tweaked.

They have worked with Olivier Giroud as an authentic number nine in preparations for this second leg. The Frenchman, who has 12 goals in 29 Champions League appearances and whose last involvement in the competition was with Arsenal when they lost 10-2 on aggregate to Bayern Munich a year ago, has impressed in flashes as a Chelsea player.

The £18 million mid-season addition is likely to start in the middle of the front three flanked by Hazard and the in-form Willian in the hope that what Giroud lacks in pace he may compensate for in an ability to shield passes from deep. Chelsea will need an outlet to relieve the pressure and, the logic goes, the 31-year-old should provide more of a focal point.

The alternative had been Álvaro Morata but the £60 million record signing, after such a bright start, is enduring a horrible lull in his first season at Stamford Bridge. The Spaniard, once of Real Madrid and a scorer for Juventus as they succumbed in the 2015 final against Barça, has not registered since St Stephen’s Day and his cameos increasingly betray his frustration.

The 18 minutes played against Crystal Palace on Saturday illustrated his anxious state of mind: he was booked after an altercation with James Tomkins, risked further sanction in stoppage time when berating an assistant referee and offered next to nothing in the final third.

“Don’t forget, for Morata, this is the first full season in his career,” Conte said. “With Real Madrid and Juventus he was on the bench, the first substitution if the striker was injured. So, for this reason, we must have great patience. You are talking about an important striker. He has a really important prospect for Chelsea, for the present and the future. I’ve seen great focus and great will to try to fight for a place here.”

He may have to demonstrate that off the bench, as Fernando Torres did so gloriously on Chelsea’s last visit to these parts. His stoppage-time equaliser, which put the gloss on the 10-men’s heroic efforts in the 2012 semi-final, established Torres as a cult hero. Morata can aspire to emulate as much.

Regardless of the identity of the frontline, Chelsea will need to be more clinical than they were against Palace and calmer in possession than they demonstrated at Manchester City or in the first leg against Barça, if they are to achieve something remarkable.

Not that Conte would be satisfied merely to force passage into the quarter-finals, which would emulate his best achievement as a manager in this competition.

“I hope, in my career, I consider an achievement to be when I win something,” he said. “Now we are talking about the last 16. We have to make a great game if we want to have a chance to go into the next round but you are never sure with football.” – Guardian

1 Tipping Point: DeChambeau’s transformation raises questions, but who will ask them?
2 Ken Early: Resurgent United can be the top team – in Manchester
3 Monica Seles: The warrior queen who could have been the best ever
4 TV View: Stunned silence as Serpentine wins a socially-distanced Derby
5 Hatton you heard, it’s Tyrrell’s time despite DeChambeau’s dominance in Detroit
Real news has value SUBSCRIBE