Tottenham striker should have been assessed on Monday 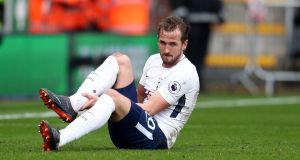 An injured Harry Kane of Tottenham Hotspur holds his ankle during the Premier League match between Bournemouth and Spurs at Vitality Stadium. Photograph: Catherine Ivill/Getty Images

Harry Kane has still not undergone a scan on his right ankle having hurt it during Tottenham’s 4-1 victory at Bournemouth on Sunday. The 24-year-old had to be withdrawn on 34 minutes having sustained the injury and was due to have it assessed on Monday. However, 24 hours later that still had not happened, with swelling believed to behind the delay.

Kane has injured the same joint twice previously in the past 12 months and missed 14 matches as a consequence. In the absence of an official statement from Tottenham, there were continued fears that Kane faces an extended layoff.

The striker, who has scored 35 goals in all competitions for Tottenham this season, is almost certainly out of their FA Cup quarter-final tie with Swansea City at the weekend as well as the visit to Chelsea on April 1st. In all probability, Kane will also miss England’s friendlies with the Netherlands and Italy this month.

The news came as Tottenham fans and their former striker Gary Lineker denounced the ticket price increases that will be introduced when the club moves into its new stadium next season, warning that many existing supporters will be unable to continue attending matches.

Lineker wrote that “avarice will only damage the game and clubs”, adding: “We’re seeing more and more empty seats at grounds. Given the vast sums received from TV rights, ticket prices should be falling not rising. The game needs full stadiums otherwise its appeal will slowly decline, even to rights holders.”

Spurs revealed their pricing policy on Monday for the 62,000-capacity ground being built on the site of the club’s former home, White Hart Lane. The club hopes to sell 42,000 season tickets, ranging in price from £795 to £2,200. This season Spurs are staging their home fixtures at Wembley, where the cheapest season ticket costs £645.

“With fans already contacting us saying they are priced out, we cannot view this [price rise] as anything other than a missed opportunity,” read a statement from the Tottenham Hotspur Supporters’ Trust after examining “an over complex system that allows attractive headline claims to be made but which mask the price rises many will now face.

“Some fans are facing increases of 25, 40 or 50 per cent in their usual seating areas which, even taking into account the improved facilities, will be beyond many, whether they are longstanding season ticket holders or whether they signed up for the first time for the year at Wembley.

“Spurs fans are excited by the prospect of returning to Tottenham to a new stadium that will be one of the best in the country, and they recognise the commercial realities of delivering on that vision. At the same time, they wanted a stadium that was financially accessible to existing and future fans in an era in which elite football is awash with money.”

1 Nadia Power determined to push on to the next level
2 The Best Of Times: Harrington stares down Garcia in epic Claret Jug battle at Carnoustie
3 College football turns blind eye to Covid-19 by risking players' health
4 Coronavirus has turned Viktor Hovland into long drive champion
5 Rugby impasse continues as no deal reached in fourth round of IRFU salary talks
Real news has value SUBSCRIBE