Italian side advance on away goals against Shakhtar Donetsk 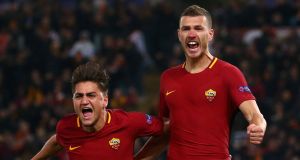 Roma’s Edin Dzeko celebrates with Cengiz Under after scoring their first goal in the Champions League round of 16 second leg against Shakhtar Donetsk at Stadio Olimpico. Photograph: Max Rossi/Reuters

Roma beat Shakhtar Donetsk 1-0 on Tuesday to reach the Champions League quarter-finals for the first time since 2008 as a magnificent finish by Bosnia striker Edin Dzeko sent them through on away goals.

Roma celebrated only their second win in six meetings with the Ukrainian side and got revenge for a 6-2 aggregate defeat by Shakhtar at the same stage of the competition in 2011, although they endured a nervy finish.

Having trailed 2-1 from the first leg, Roma looked bereft of ideas for much of the contest at the Stadio Olimpico before Dzeko broke the deadlock in the 52nd minute following a tepid first half devoid of goal-mouth action.

Shakhtar came close to extending their overall advantage when Roma defender Alessandro Florenzi headed a floated free kick into the box inches wide of his own far post.

Roma’s solitary glimpse of goal in the opening half came in the 28th minute when visiting goalkeeper Andriy Pyatov palmed away a fizzing low cross by Aleksandar Kolarov to deny Dzeko a simple tap-in from close range.

The home side came out with renewed purpose in the second half and Dzeko delighted Roma fans when he broke the deadlock with a trademark clinical finish.

The Bosnian took a defence-splitting pass from midfielder Kevin Strootman into his stride and beat the offside trap before he steered the ball into the far corner with the outside of his foot past the advancing Pyatov.

Dzeko curled a shot from the edge of the penalty area inches wide in the 62nd minute before Shakhtar centre back Ivan Ordets was shown a straight red card in the 79th for hauling down the Bosnian when he was through on goal.

Despite being a man down, Shakhtar launched a late onslaught and had several dangerous raids down the left flank but the home team’s defence held on until the final whistle.