Burton one step from Wembley after taking down Middlesbrough 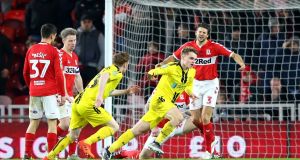 Middlesbrough supporters know better than to underestimate a Clough and, by the end, there was a sense few on Teesside begrudged Nigel Clough’s achievement in leading League One Burton Albion into the Carabao Cup semi-finals.

Which is not to say they exempted Tony Pulis or his players from blame on a night when Jake Hesketh’s goal separated the sides and there were sufficient robust boos to suggest Boro’s manager is starting to be seen as more problem than solution.

Clough had hoped to visit the statue of his late father, Brian, in nearby Albert Park before kick-off. Clough Sr was born and bred in Middlesbrough, courted his wife, Barbara, in the town’s Rea’s cafe – a business owned by the family of Chris, the singer/songwriter – and rattled in a staggering 204 goals in 222 appearances for Boro before defecting to Sunderland.

At a time when his side’s Championship promotion push seems to be stalling, how Pulis could do with a striker even half as prolific.

This reality was swiftly emphasised as a stretching Jordan Hugill failed to connect with Martin Braithwaite’s smart cut-back with Burton’s backline bisected and then the visiting goalkeeper, Bradley Collins, did well to tip an angled shot from the midfielder Lewis Wing over the bar.

Clough’s side are 15th in League One following last season’s relegation from the Championship but, despite such scares, they started well with Lucas Akins – the lone striker in a well organised 4-5-1 formation – showing off some of the fancy footwork partly stemming from a childhood spent as a star pupil at a Huddersfield dance school.

Akins was good enough to perform ballet and tap routines on stages across Yorkshire and possesses the mobility to prove it but still struggled to outmanoeuvre Pulis’s obdurate central-defensive pairing of Aden Flint and Danny Batth.

From Dael Fry’s perspective it was a good thing that pair were holding firm as Boro’s right back was being teased and tormented by Scott Fraser’s left-wing advances. Such travails might have been glossed over had Stewart Downing’s curling free-kick eluded Collins but, instead, Clough’s goalkeeper pushed the ball to safety.

Collins also proved equal to a subsequent Hugill shot before watching the follow-up blocked by Jake Buxton as an ostensibly strong home XI began displaying the sort of slight hesitancy which perhaps explains why they have gone four league games without a win.

Injuries had deprived Burton of a handful of key players but they generally held their own, surviving a somewhat optimistic penalty appeal when Buxton’s challenge sent Braithwaite crashing with the ball already overrun.

Clough’s side might have taken a counterattacking lead after Fraser once again highlighted Fry’s vulnerability and prefaced a slick move featuring a clever Akins dummy concluding with Marcus Myers-Harness sending a shot curving over the bar.

Myers-Harness began the second half by missing another decent chance. No matter Clough had clearly got his message across during the interval as, almost immediately, Fraser played in Jamie Allen whose shot rebounded off a post.

The ball fell to the Southampton loanee Hesketh, who had time to slip and recover before dispatching a left-foot shot into the bottom corner.

Jeers became audible among a sparse Riverside crowd on a damp windswept night and, frantically pressing all available buttons, Pulis used all three substitutes. One of them, Marcus Tavernier supplied a cross from which Flint headed wide from two yards to confirm it was Clough’s night. – Guardian

Ian O’Riordan: Learning to run for the first time all over again 19:00
Davy Russell ponders what might have been for Tiger Roll 18:07
Cycling Ireland thrilled with take-up for Zwift League series 17:02
Racetrack organisation does not envisage any closures in the short-term 15:03
Coronavirus crisis could cost the GAA up to €60 million 14:19