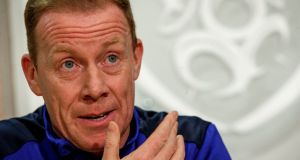 PFAI general secretary Stephen McGuinness: “As things stand we don’t have a full-time academy; not a single one that mirrors anything of that nature in the UK.” Photograph: Ryan Byrne/Inpho

Fifa says the exception to its rules that allows the transfer of 16- and 17-year-olds between EU states will apply to Britain until the end of the year, meaning that young Irish players will be able to join Premier League academies in the summer.

There is, however, a lack of clarity about how Brexit will affect the ability of teenage prospects from this country to follow what has been the traditional route to a career at the top level of the club game once Britain’s transition period ends.

“When it comes to the transfer of players between the age of 16-18, the EU/EAA exception applies in territories where EU law is in force,” said the game’s governing body in a statement issued on Thursday.

“Fifa’s understanding is that under the terms of the UK withdrawal agreement, EU law [including EU law on free movement] remains in force until the transitional period ends, on December 31st, 2020.”

That means that Premier League clubs have one more transfer window, this summer, in which to sign players aged 16 or 17 from around Europe, including Ireland.

One senior official at a Premier League academy told The Irish Times this week that his club has received advice from both its lawyers and the Premier League itself that beyond that players from the Republic of Ireland would ultimately be unaffected by the loss of the exemption which will kick in when Britain no longer adheres to EU law.

There will, he said, be no need to change the clubs’ approach to signing players from Ireland.

However, a prominent lawyer at a firm that advises many Premier League clubs on the recruitment of players from overseas can see no basis for that belief as things stand.

Andrew Osborne, head of business immigration at Lewis Silkin, says that there is an argument that the freedom of young Irish players to move to England should be protected under the terms of the Common Travel Area, which allows unrestricted movement between Britain and Ireland and gives citizens of one country the right to work in the other. However, he says Fifa does not currently recognise that special status in its rules, and any case intended to oblige it to could prove long and difficult.

“I think there are lots of people who believe that clubs shouldn’t be affected,” says Osborne. “But I don’t think that there is any particular legal basis for that belief. I think there is a view that it would be illogical to suddenly apply different rules to football.

“At the moment with Irish players it is a bit complicated in that they have two rights to come and work in the UK, as Europeans and then under the Common Travel Area arrangement. As things stand, though, there isn’t a specific rule that says because of that different relationship between the UK and Ireland young Irish players can still move.

“Obviously that is something that might happen in the future, and logic would say that if you had a concession for EU nationals then, going forward, should there be a concession for Irish players, because they obviously have a right to come here at 16 anyway.

“At the moment, however, they would get caught by the fact that there isn’t any sort of clarity about how that concession is going to be applied. It is really only for EU nationals, and they haven’t taken into account the status of Irish nationals in the UK, the fact that they are not reliant on being Europeans.”

The situation might, he acknowledges, be open to a legal challenge “but is it likely to be decided quickly? Potentially not. It might be one of those long-running arguments.”

To date the FAI has said little about the situation, but Stephen McGuinness of the Professional Footballers Association of Ireland (PFAI) believes the changes could oblige the association and clubs in Ireland to dramatically up their game when it comes to player development.

“We might find that we are forced by Brexit to do something that we should have done years ago. As things stand we don’t have a full-time academy; not a single one that mirrors anything of that nature in the UK.

“But from what we have seen it would benefit everyone if our players are that little bit older, that little bit more mature going over to England. The players themselves are better to adapt to the challenge, and the clubs here are treated very differently when the transfer involves a player who is already a professional.

“But to get to that point we have to be able to offer our young players the same opportunities to develop, and this just might be what we needed to make the FAI work with our leading clubs to do that.”

4 Joanne O’Riordan: Inspirational Press a winner in more ways than one