Whatever they did, you sensed Manchester City were not going to score against Spurs 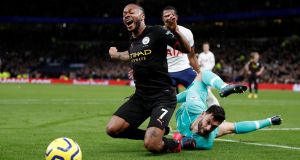 There came a point, some time between Ilkay Gündogan missing an open goal and Oleksandr Zinchenko getting himself sent off and Davinson Sánchez heading the ball against his own crossbar from point-blank range, when you realised that whatever they tried, whatever they did, Manchester City were not going to score. It happens.

Some days you just catch a whiff of bad juju at breakfast, can’t shake the feeling on the bus to the stadium, miss a couple of early chances and the entire afternoon simply unravels with a strange and unstoppable momentum. Ferran Soriano, City’s chief executive, once wrote a book called The Ball Doesn’t Go in By Chance. This was the shorter and less acclaimed sequel: By Chance, the Ball Doesn’t Go In.

It’s possible, of course, to reverse-engineer these things with the benefit of hindsight. You could say City were profligate in front of goal, that Kevin De Bruyne lacked his usual precision, that Raheem Sterling looked like a man who needed a rest a month ago, that a more experienced defender than Zinchenko would have realised that the threat of a sprinting Harry Winks on the counter is really not very much of a threat at all. You could study the goals in agonising microscopic detail and draw little coloured arrows on the screen and make sombre statements like: “For me Brian, Fernandinho’s got to be quicker to close him down there, even if we have used digital technology to slow down his movement to one-12th of its usual speed.”

Equally you could pay tribute to Tottenham’s resilience, to the brilliance of Hugo Lloris, to the way they capitalised as the game opened out in the last half-hour. You could point to the increasingly influential Giovani Lo Celso in the centre of midfield and the rapidly improving Serge Aurier on the right flank and the winnowing gap to Chelsea in fourth place as evidence of their progress. You could even regard this game as a companion piece to the 1-0 defeat against Liverpool last month, as a sort of template for how a post-Pochettino Spurs will approach big games against elite opposition.

None of this would be untrue. And yet ultimately, none of it would really go very far towards explaining the result of this match, in so far as it could be explained it at all. It was instead the culmination of a thousand tiny tendencies, all somehow pointing in the same direction like the grain of a lawn. An outrageous accumulation of chance and happenstance, abetted by the usual VAR vaudeville, some outstanding balls-on-the-line defending and the heroics of Lloris in goal: flying around his penalty area, limbs flailing, like a hyperactive child octopus.

Naturally it was tempting to chalk this up as a classic José Mourinho spoiler victory: one in the eye for his old foe Pep Guardiola, a salty two fingers to the doctrine of possession football, a gigantic up-yours to Unicef. This is the game of expectations, and some managers are better at it than others. Sam Allardyce used to linger on his wins in near-pornographic detail, leaning lasciviously into the microphone and explaining at great length how the previous 90 minutes had simply been fate’s messenger.

“We played the three in midfield and the two up top with the quick switches of play and they couldn’t handle it,” he would gush, and you would sit there nodding sagely, because after all he had just won a Premier League game, and you hadn’t. Then you would leave the room and realise, with a jolt: hang on, didn’t your team just get battered?

And yet, for all City’s shot supremacy and dominance of the ball, this didn’t feel like a classic anti-football treatise. Mourinho teams have always been prepared to soak up pressure and take the game deep, but it’s a strange sort of masterplan that owes its success to a missed penalty, at least two knife-edge VAR calls, a shot hitting the post via two minuscule deflections and a freakish red card against the run of play. What may end up going down as the signature win of Mourinho’s first season at Tottenham was the result of no real discernible strategy, no cogent internal logic: just the crude and comical nihilism of football.

To Mourinho’s credit, even he didn’t try to dress this one up. Tottenham were, he admitted, “a bit lucky in a couple of situations”. The penalty drama was, he said, “God’s will”.

And in a way, this has always been a central plank of his thinking: you can propound your fanciful ideologies and your pretensions to control, and yet there will always be a part of the game that you can never touch. It’s a manifesto of chaos, a template of nothing at all, and yet here, as this game wound to its illogical conclusion, it seemed like the only truth left in the world. – Guardian