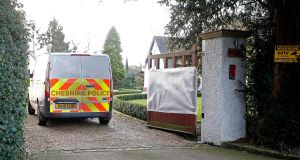 Cheshire Police are investigating Tuesday night’s attack on the house of Ed Woodward, the Manchester United executive vice-chairman, and have confirmed that no one was harmed.

A statement issued on Wednesday said: “At around 10.45pm on Tuesday 28 January, Cheshire Police were notified of an incident of criminal damage that had taken place earlier this evening with a large group targeting a property in the Nether Peover area.

“Thankfully no one was harmed, and officers will liaise with security officials over the coming days to establish the full circumstances surrounding this incident and identify those involved.”

No one was in the property at the time of an attack that marked a sickening escalation of the tensions between supporters and Woodward, who is married with two young daughters.

Fans, unhappy at the way in which the club is being run, have recently sung songs celebrating the death of the 48-year-old who has become a figure of hate among some sections of the United support. However, the situation took a sinister turn on Tuesday night when a group wearing balaclavas launched flares at Woodward’s Cheshire home. One video was then posted on social media with the caption: “Ed Woodward’s gonna die.”

Graffiti was reportedly sprayed on the front gates and the intercom unit and house sign beside it were defaced with red spray paint.

United quickly released a strongly worded statement condemning those involved and promising to hand out life bans to anyone found guilty of any criminal offence.

A spokesman said: “Manchester United Football Club have tonight been made aware of the incident outside the home of one of our employees.

“We know that the football world will unite behind us as we work with Greater Manchester Police to identify the perpetrators of this unwarranted attack.

“Anybody found guilty of a criminal offence, or found to be trespassing on this property, will be banned for life by the club and may face prosecution.

“Fans expressing opinion is one thing, criminal damage and intent to endanger life is another. There is simply no excuse for this.”

Defeats at Arsenal and at home to Burnley have increased the pressure on United, who are 33 points behind the Premier League leaders Liverpool. – Guardian