Aston Villa one game away from Premier League return 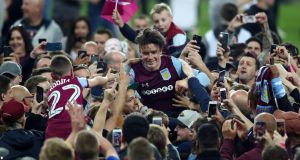 Jack Grealish is carried by Aston Villa players after their goalless draw with Middlesbrough, which secured a play-off final date at Wembley. Photograph: Clive Mason/Getty

A long, traumatic season for Steve Bruce could yet deliver a happy ending of sorts as Aston Villa moved to within 90 minutes of a return to the Premier League. For Bruce, who has been through such a distressing time after losing both parents in the past three months, it would be a remarkable achievement if he can see this gruelling campaign through and mastermind his fifth promotion to the top flight.

Fulham await at Wembley on Saturday week after Villa, playing with resilience and courage, frustrated a Middlesbrough side who were left to rue the goal that Mile Jedinak headed in at the Riverside in the first leg.

There was a lack of goals here but no shortage of drama on a raucous night at Villa Park, with Stewart Downing’s 88th-minute free-kick coming within the width of the crossbar of forcing extra-time. Middlesbrough ultimately came up short, however, and it is Villa, who were relegated from the Premier League two years ago, who have a shot at redemption.

The evening had started in sombre mood and with a minute’s applause as a mark of respect to Jlloyd Samuel, the former Villa and Bolton Wanderers player who was killed in a car crash earlier in the day. Aged 37, Samuel pulled on a Villa shirt 199 times between 1999 and 2007 and it was a touching moment as his name reverberated around this famous stadium just before kick-off.

The game itself was gripped with tension from the outset and there were periods in the first half when Villa seemed to be in danger of getting too caught up in the occasion. Bruce’s team retreated so deep at times, almost inviting Middlesbrough pressure by holding the edge of the penalty area. The apprehension among the home supporters was tangible, especially whenever the electric Adama Traoré threatened to go through the gears.

Alan Hutton, once again, was tasked with shackling the Spaniard and the booking that the Villa full-back received on the stroke of half-time promised to make an already difficult task harder still. Bruce’s pained expression as Mike Dean, the referee, brandished that yellow card said it all.

Middlesbrough, however, created little in the opening 45 minutes. Too many hopeful balls were lobbed into the Villa area – John Terry and James Chester looked comfortable enough dealing with any aerial threat – and the only real moment of genuine consternation for the home team was when Hutton misjudged a long throw from Ryan Shotton. Fortunately for Villa, the ball bounced off Britt Assombalonga and over the bar.

From an attacking point of view, Villa threatened only sporadically in the first half but looked particularly dangerous whenever they countered and hit Middlesbrough on the break. Albert Adomah had the beating of Shotton, the Boro right-back, and it was a fine piece of play from the Villa winger that came close to carving out a golden chance for Conor Hourihane. Charging into the area, Hourihane looked set to score but George Friend, to his immense credit, got back to make a superbly timed challenge that cleared the danger.

The most presentable chance of a tight first half arrived moments before the break and from a Jack Grealish corner. Lewis Grabban nodded the ball down invitingly for Chester but the central defender seemed to snatch at his shot, screwing a low right-footed effort from 12 yards that skidded past the upright.

The game had to open up in the second half and it did. Mo Besic dragged a low shot wide for an increasingly desperate Middlesbrough side, while at the other end Villa put together the best move of the match courtesy of a lovely interchange between Grealish and Adomah. Grabban, darting towards the near post, met Adomah’s low centre with a flick of the right boot that forced Darren Randolph into an instinctive save. The visitors’ goalkeeper had to make another stop midway through the second half to deny the same player, after Grabban drilled a 30-yard shot that was flicked over the bar.

Tony Pulis knew that had to role the dice and with 17 minutes remaining Rudy Gestede came off the bench to join Patrick Bamford, another substitute, up front. Yet it was Villa who looked more likely to score as Grealish, picking up possession 25 yards from goal, curled a rising shot that Randolph clawed away. Downing then saw that late free-kick, after Sam Johnstone handled outside the area, strike the woodwork and with that Middlesbrough’s hopes were gone.

1 Saracens to accept second 35-point deduction and effective relegation
2 Welcome to Iten in Kenya – home of champions and cheats
3 How do Klopp’s Liverpool measure up against greats of past?
4 TJ Reid reveals the fresh secrets of his consistency
5 Shane Lowry’s Abu Dhabi defence crumbles in the sand
Real news has value SUBSCRIBE